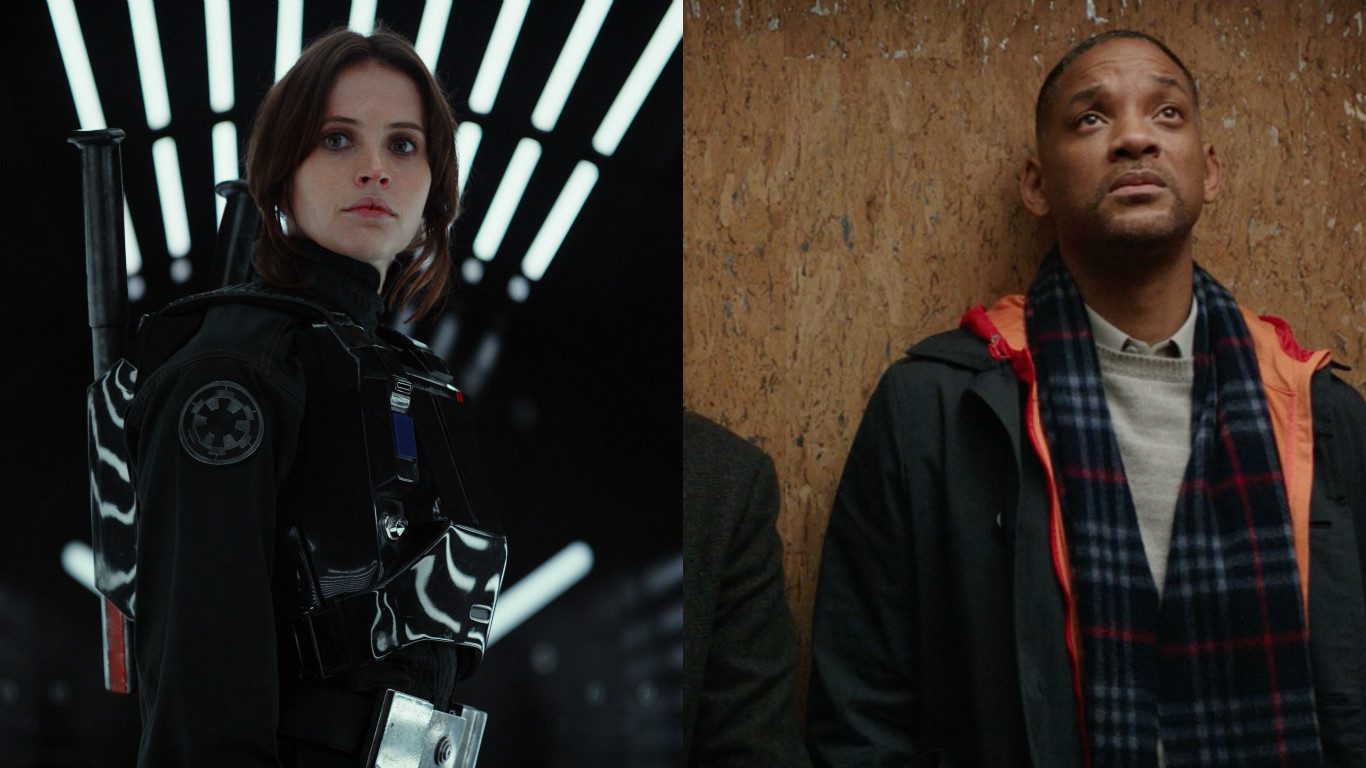 Hitting the bullseye of most tracking expectations, Disney and Lucasfilm debuted their second Star Wars film, Rogue One: A Star Wars Story, within a year’s time to an impressive domestic launch of $155 million.  The weekend figure includes $29m from Thursday evening previews, putting the opening at the 12th largest of all time in America.  Director Gareth Edwards’ prequel debuted in 54 markets worldwide, and earned an additional $135m internationally for a mammoth $290m launch.

Now this of course is nowhere near the $249m domestic opening of Star Wars: The Force Awakens, nor is it close to that film’s record $529m worldwide debut, but Rogue One‘s domestic weekend haul is larger than any other Star Wars film ever.  So for an anthology spinoff that is not part of the ongoing ‘episode’ series, this is quite a feat.  However, marketing rested heavily on tying in familiar elements of the franchise, specifically the return of Darth Vader to the films which surely helped capitalize on audience nostalgia.  Rogue One received an ‘A’ Cinemascore and was greeted warmly by critics.  The film currently holds a tomatometer score of 84%.

Also opening this weekend, Will Smith’s latest drama Collateral Beauty faceplanted in its debut with a very mild $7 million.  This is without a doubt a huge blow for the star as the film not only failed to perform financially, but was also kicked to the curb by critics.  This failure is almost inexplicable with a cast, led by Smith, also including Helen Mirren, Kate Winslet, Edward Norton, Michael Pena, and Keira Knightley.  Despite coming in as Smith’s lowest wide debut of his career, audiences that saw the film were far more pleased than the critics.  Collateral Beauty earned an ‘A-‘ Cinemascore from paying audiences.  While the next few holiday weekends could save the film a bit, there will be so much competition that the melodrama will be lucky to recoup its $36m budget.  Luckily for Smith, he also had his largest opening weekend and domestic grosser of his career this year with Suicide Squad, so this misstep probably won’t hurt his asking price too much.

It will be a busy week at the box office as Passengers starring Jennifer Lawrence and Chris Pratt, as well as Assassin’s Creed, and the animated Sing all debut on Wednesday.  Launching on Friday is the Bryan Cranston-James Franco comedy Why Him?, while several limited releases gunning for Oscars roll out including: Patriots Day (Mark Wahlberg), Live by Night (Ben Affleck), Silence (Dir. Martin Scorsese), and A Monster Calls.