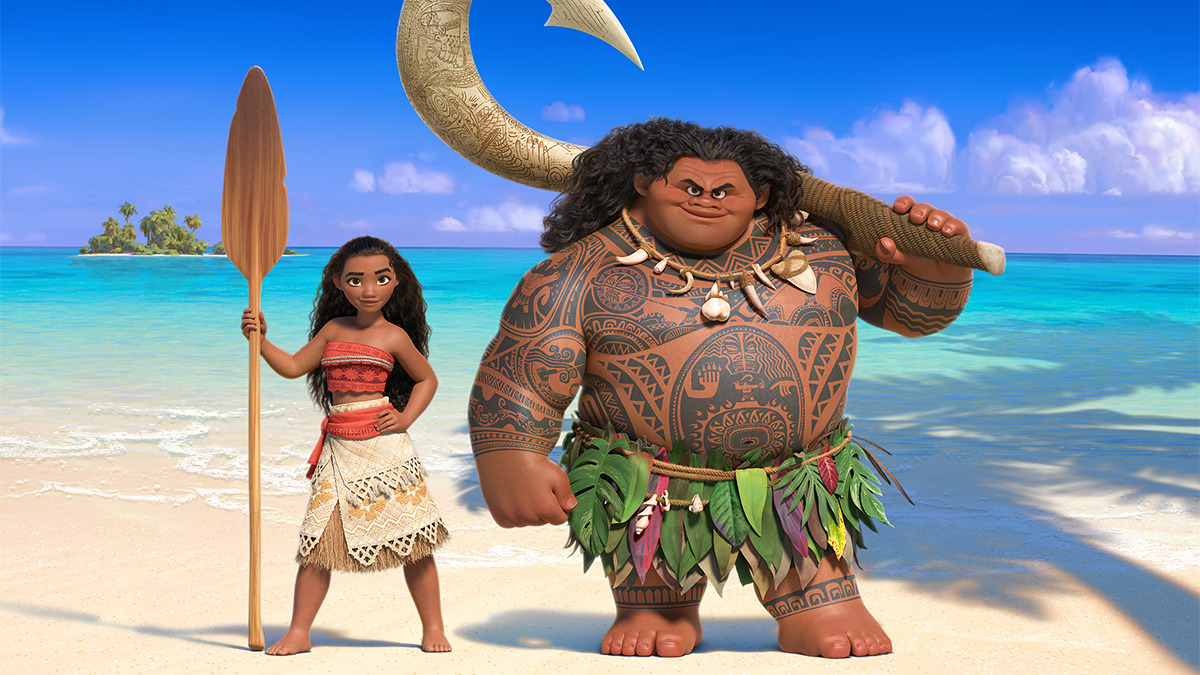 Thanksgiving weekend was busy once again this year.  To no surprise, Disney’s latest animated feature Moana took an easy first place with $55.5 over the 3-day weekend for a total of $81.1m since releasing on Tuesday evening.  This is a great opening for the studio, certainly falling short of Frozen’s 5-day take of $93m, but sticking right in line with Toy Story 2‘s $80m gross.  Both films opened over the same Thanksgiving weekend as Moana.  Polled audiences awarded the film an ‘A’ Cinemascore and critics loved the film as well.  The future certainly looks bright until Disney’s Rogue One opens next month.

Fantastic Beasts and Where to Find Them dropped to second place and held much better than expected.  The prequel dipped 39% to $45.1 million in its second weekend.  This is a better hold than fellow prequels The Hobbit: An Unexpected Journey and Oz: The Great and Powerful experienced.  With $156.2m after two weekends, Beasts is currently heading for $250m gross, which is about on par with Harry Potter and the Chamber of Secrets and Prisoner of Azkaban.  With openings in new territories abroad, including China, the film has amassed a solid worldwide total of $473.7m with much more to come.

Doctor Strange fell a mere 24% from last weekend to add another $13.3 million for a third place finish.  The film has now bagged $205m stateside and a massive $616m worldwide.

The news wasn’t so pleasant this weekend for Brad Pitt and blockbuster filmmaker Robert Zemeckis (Back to the Future, Forrest Gump).  Their latest WWII spy thriller Allied flopped right out of the gate, earning only $13 million over the 3-day frame.  Since opening on Tuesday night, the period film sits at a meager $18m.  The film was distributed by Paramount and features an $85m production budget.  If Allied can even make it to $40m in the States, it would need a major $200m-plus showing overseas – an unlikely feat as its early worldwide total sits at $27m.  This is the second straight flop for Zemeckis after The Walk from last year.

There are a handful of reasons this under-performance occurred.  Critics were mixed on Allied, awarding the film 61% on Rotten Tomatoes.  Brad Pitt has seen negative publicity in recent months after his divorce from Angelina Jolie.  The film also had heavy adult competition, not to mention another WWII hit to contend with in Hacksaw Ridge.  Marion Cotillard, Pitt’s co-star, is certainly not a box office draw despite an Oscar win and roles in a few blockbuster hits.  The romance pairing simply did not translate to audiences as a must-see event.  The film ultimately earned an okay ‘B’ Cinemascore.

Arrival held well over the weekend, dropping only 7% to fifth place.  The sci-fi drama abducted another $11.2 million for a solid $62.3m total so far.  Trolls also managed to hold reasonably considering a major new animated offering in Moana.  The Fox film dropped 40% to $10.3m for a $135.1m gross.  The family hit has $291m worldwide so far.  Not to be outdone, Almost Christmas dipped to seventh place but actually increased its gross from last weekend to $7.6m for a $36.6m running total.

Bad Santa 2 opened 13 years after its predecessor this weekend and didn’t fare so well.  Audiences rejected the sequel as it only earned $6 million over three days, and $9m since Wednesday.  Part 2 is trailing the original by half already, so expect a sub $20m gross, or about a third of what the first film earned, unless it can hold up over the season.  With a ‘C+’ Cinemascore, a leggy run isn’t likely.

Hacksaw Ridge managed another slim decline once again.  The WWII drama fell a tiny 18% from last weekend to bag another $5.4 million which brings its domestic total to $52.2m so far.  The leggy hit kicked off its run with a moderate opening weekend of only $15m.  Word-of-mouth and fantastic reviews have allowed the movie to hold up well.  With awards season heating up next month, expect the Mel Gibson-directed film to keep chugging along.

The final new wide release of the weekend, Warren Beatty’s Rules Don’t Apply fizzled out as a fans-only affair.  The period romance from Fox has only generated $2.1 million since Tuesday night, and finished in 12th place this weekend.  The Oscar-winning director hasn’t stepped behind the camera since 1998’s Bulworth, so it’s a bit disheartening to see his latest feature fall so hard.  Audiences didn’t find much to like and awarded the movie a lackluster ‘B-‘ Cinemascore, while critics didn’t get on board either.  Expect a final gross of around $6 million.

Holdovers will dominate next weekend as well, as the only new wide release will be the Aaron Eckhart-starring Incarnate from High Top Releasing. 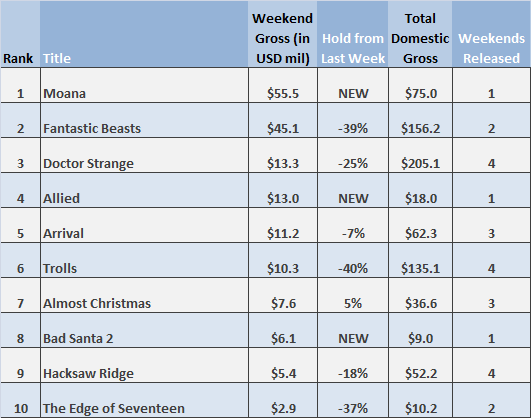