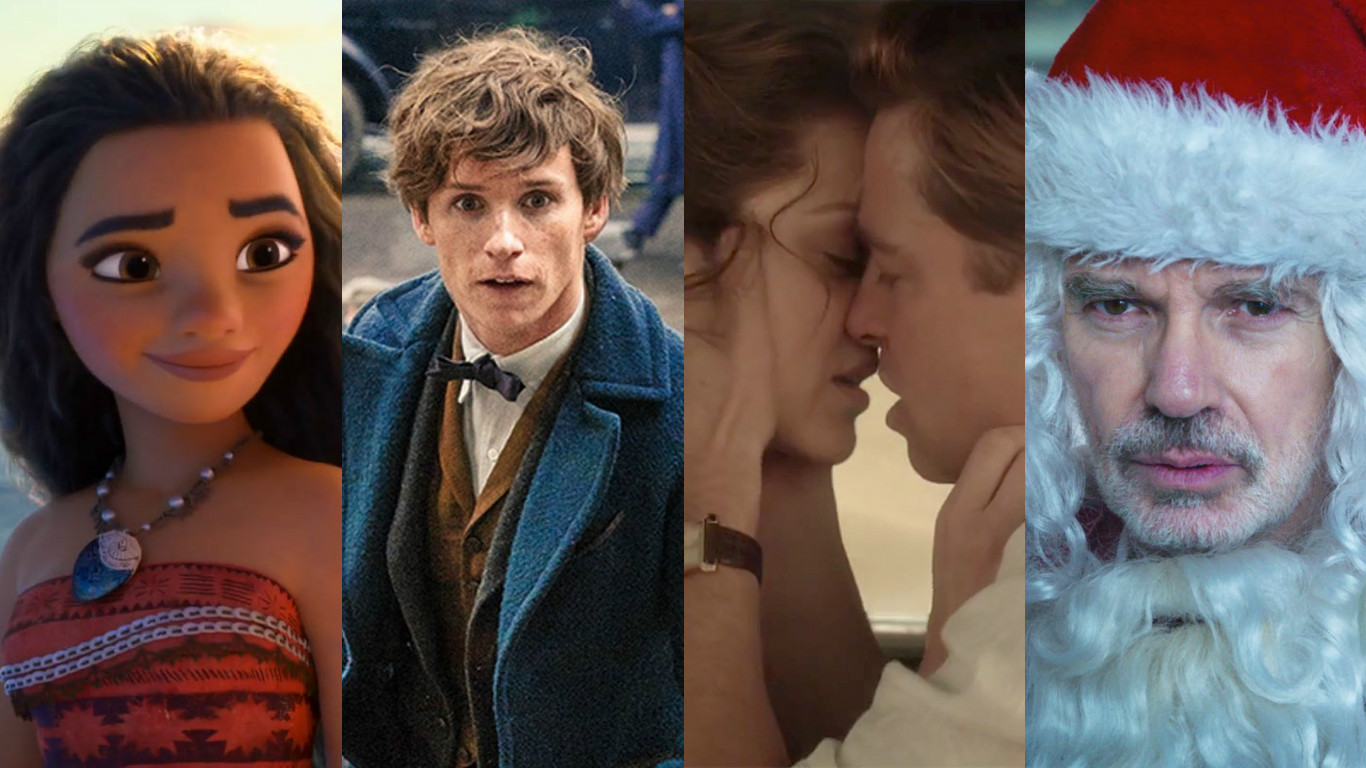 As families gather together for some turkey tomorrow, four new wide releases attempt to lure them out to the multiplex.  Disney’s newest animated feature Moana will go head-to-head with the second weekend of Fantastic Beasts and Where to Find Them, while the war drama Allied and the crude comedy Bad Santa 2 toss their hats in the ring.  Not to be left out, Warren Beatty returns to theaters for the first time in 18 years with his period drama Rules Don’t Apply.

Disney animation has seen an incredible resurgence in their brand in recent years. Newfound classics like Tangled, Frozen, and Zootopia have brought the studio back to their early 1990s heights.  Moana, the studio’s latest from the directors of Aladdin and The Little Mermaid, looks to continue that trend.  Featuring the voice of Dwayne Johnson, one of the biggest superstars in the world right now, and sporting a 97% fresh rating on Rotten Tomatoes, Moana should take the number one spot easily this weekend.  Tuesday night previews saw a gross of $2.6 million which could give the film $60m over three days, and possibly $80m over the five-day weekend.

Brad Pitt and Marion Cotillard headline the WWII spy thriller, Allied, from director Robert Zemeckis (Forrest Gump, Flight).  The R-rated romance thriller should play to an adult-skewing audience already preoccupied with a lot of options recently.  With only a decent 64% fresh rating, breakout potential is a bit limited, but the star power should help offset lacking buzz.  Look for the film to open to around $16 million, and possibly hit over $20m after the long weekend.

Bad Santa 2 looks to be a case of the classic too-little-too-late problem that has hurt many comedy sequels as of late.  The film reunites the main cast of the 2003 original led by Billy Bob Thorton in one of his most popular roles.  The sequel has been earning dismal reviews, though the core fan base may not care so much.  Bad Santa debuted to $12 million on this same weekend 13 years ago, but legged its way to $60m.  Expect a similar opening in the $10m range over three days, but a faster fall in the weeks ahead.

Warren Beatty is back in the director’s chair and as a supporting actor in his latest film Rules Don’t Apply.  Expect a very minimal turnout for this 1958-set romance in old Hollywood.  I honestly did not know this film was opening this week, and I’m guessing there are too many options out there for this movie, which is hovering around 59% on Rotten Tomatoes, to make a dent this weekend.  Having earned a mere $65k from Tuesday night showings, a $2.5 million take over five days seems like a best-case scenario for the veteran filmmaker.

With all of these options vying for audiences, Fantastic Beasts and Where to Find Them may slide to $37 million over three days (dropping by half from last weekend), and could find $55m by Sunday evening.  That would boost its cume to a solid $145m.

Check back later for weekend updates!