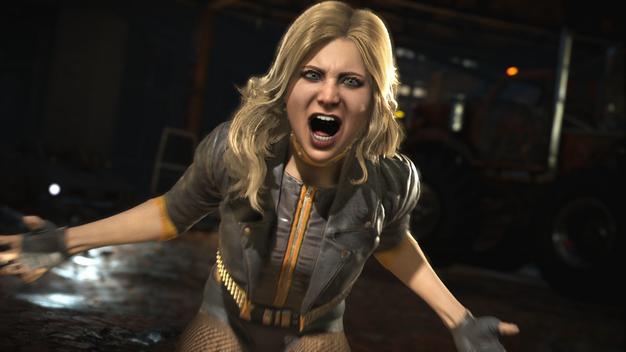 Check another character off your Injustice 2 dream list, folks. Black Canary has officially been confirmed to appear as a playable character in the imminent DC fighter. In conjucntion with IGN First, Warner Bros. has released the following gameplay reveal trailer.

It’s been a good week for fans of the character, as Arrow’s latest episode just dropped an interesting bomb about Laurel’s replacement who’s not actually a replacement… At any rate, what’s shown in the trailer warrants plenty of giddiness. She looks great, sounds great, and who can’t wait to see her and the Bat go head to head?

Black Canary’s reveal trailer also gives fans another sneak peek at Blue Beetle. In addition to that, her finishing move is shown off and it looks devastating. Plus, she appears to have numerous combo possibilities, mixing in her hand to hand prowess with her Canary Cry.

Now we’re left wondering what role the heroine will play in the story. Is she a part of Batman’s insurgency or is she a proud member of Superman’s regime? A safe bet would be that she’s fighting the good fight with Batman and his allies, but as Gods Among Us made apparent — anything is possible.

The game is still a few months out from launch, so more details and character reveals are sure to fill the time. Recently, we learned Braniac will be the game’s big bad. It seems, at least on the surface level, that he and the Man of Steel may potentially team up. If that is the case, a fighter like Black Canary could be integral to conserving humanity’s freedom. Luckily, the guessing and pondering will come to an end soon. Injustice 2 hits store shelves for PlayStation 4 and Xbox One on May 16. In the meantime, tell us who else you’d like to see revealed.