Leave it to the internet to scoop a movie studio’s PR department. Although Marvel hasn’t said much about it, Benjamin Bratt will appear in the studio’s upcoming Doctor Strange. The odd part is how the news has gotten out. In an era when studios tightly control every piece of information about their upcoming products, this nugget was discovered the old-fashioned way: someone read the poster. (Nicole Sobon at MCU Exchange, to be precise).

Bratt is perhaps best known for his work on NBC‘s Law and Order, but has appeared in plenty of genre fare, including Demolition Man, Catwoman, and the classic nineties crime drama, Blood In, Blood Out. More recently, he’s been seen in The Infiltrator and Ride-Along 2. He’s also diversified his palette with voice-over work. Roles in Despicable Me 2 and Cloudy With a Chance of Meatballs 2, as well as playing both Zod and Superman in Justice League: Gods and Monsters, have led some sources to speculate that Bratt’s Doctor Strange role may be voice only. 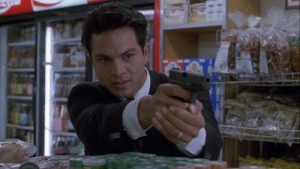 Since Marvel hasn’t said much, everything’s speculative at this point. Both IMDB and Wikipedia have Bratt listed in the film’s credits, but neither names his role. Action star Scott Adkins gets the same treatment. Thankfully, we know who plays the coveted Marvel Cinematic Universe roles of Brawny Therapist and Restaurant Passerby.

Doctor Strange hits theaters November 4th, and if the trailer is any indication, it promises to be a very different kind of Marvel movie.