The core concept right at the heart of LEGO has always been this shared creative experience. Whether it is building the Death Star with you father at Christmas, or sitting down to destroy it with him in LEGO Star Wars II: The Original Trilogy. Derived from the Danish phrase “leg godt” meaning “play well”, LEGO offers endless hours of entertainment.

That entertainment; however, has never stretched beyond cooperative play. Ever since LEGO’s foray into licensed video games back in the early 2000’s, LEGO games have seamlessly offered the ability to play alongside somebody else. They are games that invite coach co-op play.

The other side of multiplayer gaming that LEGO games haven’t encouraged is competitive play. Sure two friends can stage their own one-on-one duels within levels, but there hasn’t been a dedicated competitive mode. Until now. Year 2 of Warner Bros. and TT Games’ toys-to-life platform, LEGO Dimensions, is introducing a competitive game mode called Battle Arenas. In it, up to four plays can duke it out across four games modes: Capture the Flag, Objective, Tic-Tac Boom and another mystery mode. After spending a few hours with Battle Arenas at a preview event, this is undoubtedly the highlight of LEGO Dimensions Year 2.

As cool as some of the new Story Packs and characters being introduced may be, playing Battle Arenas was an absolute blast. It is a fusion of games such as Super Smash Bros. and Mario Party, with the loveable charm of LEGO. Playing it felt so familiar that it had me wonder how this has been absent from LEGO games for so long. There is something about running from Ethan Hawke on a bomb as Jake the Dog from Adventure Time, as he tries to pin the bomb on you before it explodes in Tic-Tac Boom. It all just felt so right.

Executive producer at TT Games, Nick Rich, spoke about how the idea of Battle Arenas came about. He said:

“Multiplayer has always been incredibly important in all our games. Every LEGO game is built with multiplayer in mind right from the ground up. But, it’s always cooperative. So we wanted to do something new with Dimensions this year. We looked at what we’ve learned from our fans and what kids love to do with LEGO, which is take their sets around to their friends houses.

“From there we thought is there a way we can encourage and reward that? That then is how the idea of Battle Arenas came about, something that tries to capture that party aspect. When it came to testing and we saw that kids absolutely loved it, we realised we had something great on our hands.”

Battle Arenas certainly came across as a mode that would be perfect for large social gatherings. With that said, playing it by yourself is also a challenge thanks to robust A.I. So robust in fact, that I never came first in any of the game modes. I am better at video games I swear. The A.I don’t simply just roll over and let you win, they behave and act like another physical player would. There would be times where they’d trap themselves in a hut during a game of Tic-Tac Boom, or get stuck in the environment. For the most part though, they were formidable foes.

If there is one thing LEGO games are renowned for, it’s their extensive cast of characters. LEGO Dimensions is of course no different. In Year 2 properties such as Teen Titans GO, Mission Impossible, ET, and Beetlejuice will be joining an already diverse cast of familiar faces. With so many characters that have a variety of abilities; however, how do you ensure playing Battle Arenas is fair? If you’re playing as Superman in Capture the Flag for instance, what’s stopping you from flying around and grabbing each player’s flag in seconds?

Nick touched on how important balancing is, but also how it won’t change the fundamental makeup of certain characters. He said:

“In cooperative play balancing is important. You don’t want one character that can do everything and one that just ambles around. But when it came to competitive play, this became much more important and we learned that lesson very quickly.

“We wanted to make things an even playing field, but there are still unique things that characters can do. For example, in the Adventure Time Pillow World arena there are pools of water that certain characters can go under and emerge in the middle of your base.

“We didn’t want to completely neuter these characters, it was more a question of levelling the playing field a little because it’s competitive play.”

As I mentioned earlier there are four modes available in Battle Arenas, with new maps included in every Year 2 pack that you buy. Capture the Flag plays just how you’d expect, but with points awarded for holding an enemy flag alongside returning it to your base. With studs that you collect by smashing things dotted around the map, you can set traps and construct defences to protect your flag/base from intruders. I fell victim to my fair share of pit falls let me tell you. The Objective mode involves trying to complete different tasks to rack up points. Some of those tasks include hunting down a character that spawns into the game and avoiding a deadly hurricane.

Tic-Tac Boom was without a doubt the most enjoyable mode out of the three. It is essentially the playground game ‘tag’, but with a bomb. The person with it has to pin it on somebody else before it explodes and they lose one of their three lives. Once they do, that player is then teleported a few yards away so they don’t get tagged again straight away. It is incredibly electrifying when you’re being chased and desperately trying to avoid getting the bomb. It felt like the classic scene from Indiana Jones when Indy is running from the giant boulder. Especially when you turn the camera to look behind you. Equally, when you do have the bomb it becomes very tense as you see that fuse slowly dwindle away whilst you frantically try and pin the bomb on another player. 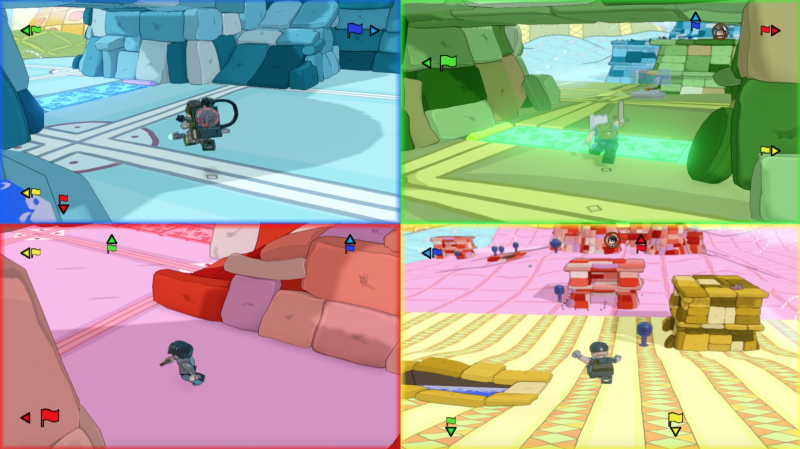 In each mode there are floating orbs that grant you random abilities, much like Mario Kart and the question marked power-ups. From casting a fireball, levitating your opponents, to a knife storm from Adventure Time. These temporary perks once again make the experience feel so familiar and enjoyable. In fact, Battle Arenas are essentially the Mario Kart Battle Modes of LEGO Dimensions.

As for Battle Arena’s fourth mode, Nick didn’t let slip what it would entail. However, that didn’t stop me from asking if TT Games had plans to add more modes to Battle Arenas in the future. He very vaguely said:

“We have been working on LEGO Dimensions for quite sometime now, but it is still quite new. We listen to the fans, we monitor the media, and so what we are trying to do is build on what people have liked. If people turn around and say they want more battle modes then yeah we’ll look to address that.”

Going into this preview event I had never played LEGO Dimensions. When it comes to the standalone LEGO games, I’ve played my fair share for sure, but Dimensions just didn’t appeal to me. Coming away from the event; however, I realised what TT Games are trying to do with Dimensions.

They quite easily could have created an ecosystem that required the purchase of additional packs that only worked in specific ways, but Dimensions isn’t that. Yes, you do have to buy additional packs if you want to play as a Gremlin for example, but once you do that is then available to use across the platform. It is one unified experience. The introduction of Battle Arenas also shows that Dimensions isn’t just about adding new characters. It’s about building on the vast history of LEGO games dating back decades to create one expansive, creative, and sociable experience. Now if you’ll excuse me, I really want to jump back into Battle Arenas. I’m coming for you Ethan Hawke.