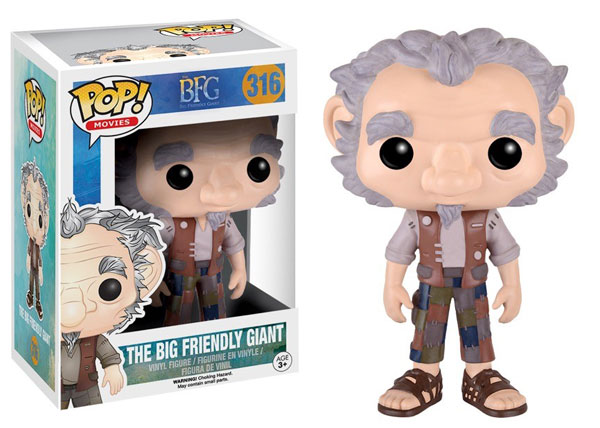 Love ’em or hate ’em, Funko Pop figurines aren’t going anywhere anytime soon. Whether it’s huge franchises like Marvel Comics, niche markets like Classic Universal Monsters or things that no one in their right mind should be affiliated with like The Big Bang Theory, Funko Pops are everywhere and can resemble almost anything.

Funko’s official website unveiled one of their upcoming figures based on Disney’s The BFG movie directed by Steven Spielberg. The product description reads as follows:

“The BFG, while a giant himself, is a Big Friendly Giant and
nothing like the other inhabitants of Giant Country.

The charming and gentle BFG befriends a precocious  10-year-old girl
named Sophie, teaches her about the magic and mystery of dreams,
and soon together they come up with a plan to get rid of the giants once and for all!

Do you feel like you need to own this adorable figure? The BFG movie based off the Roald Dahl classic book of the same name looks pretty special already, but the human beans at Funko really have designed an adorable looking product here. Anyone else want at least 5 of these things? Whether or not their model of Mark Rylance’s B.F.G. will be in-keeping with the character and be larger than conventional figures like Funko’s Giant-Man, Hagrid or Stay Puft has yet to be announced.

Hold your breath, cross your fingers, here we go. The BFG movie opens July 1 and you can own the new Funko Figure in June.