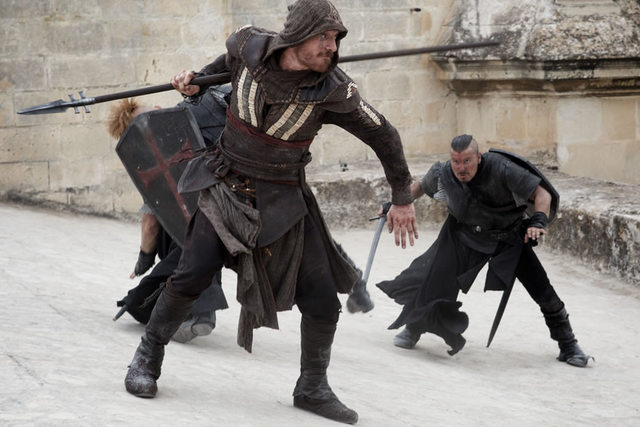 A couple of images popped up for Assassin’s Creed a few days ago. They offered a look at Callum Lynch strapped to a chair where he was to receive a lethal injection, and his 15th century ancestor battling a pair of Templars. Those two photos have surfaced again, but along with them came a few new ones as well, all of which you can check out in the gallery below.

If you weren’t sold on the look of the film before, the image directly above, with the two assassins standing over the ledge, seems like something taken from an Ubisoft trailer. Speaking of which, the film is expected to have its debut trailer launch sometime tomorrow, giving the public their first peek of Assassin’s Creed in action.

In an interview with the LA Times, the star of the film, Michael Fassbender who will play Callum Lynch and his 15th century Spanish ancestor Aguilar, spoke about his character. “Callum doesn’t belong to anything, doesn’t have a family. We thought it would be interesting to have somebody that was disconnected be faced with what it means to join something so sacrificial.”

It sounds similar to the story of the series first main protagonist Desmond Miles (Nolan North), who was a bartender separated from his family and loved ones when taken by Abstergo. However, it’s been reiterated countless times that the film won’t share the same narrative as that of the game franchise. The characters and the story being told will have no connection to what’s come before it. Check out a quick synopsis of the film, courtesy of LA Times, below and chime in with your thoughts and theories on where the movie will take the narrative next.

Callum Lynch, an alienated, violent drifter who discovers that he is descended from a 15th century Spanish assassin named Aguilar. Recruited (kidnapped is more like it) by a corporation called Abstergo Industries, Lynch taps into his ancestral memories via a device called the Animus to gain the know-how to fight the Assassins’ age-old nemeses, the Templars, in a battle for the future of humanity.