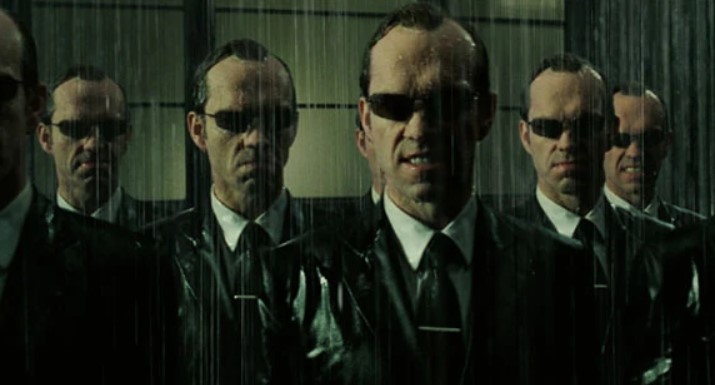 Lana Wachowski is set to bring back The Matrix to the big screen, and she’s brought along original stars Keanu Reeves and Carrie-Anne Moss to reprise their roles as Neo and Trinity. One other star that was apparently set to return was Hugo Weaving a.k.a. Agent Smith, and Weaving reveals what happened behind-the-scenes that Smith was written out of the film.

“Lana Wachowski had rung me at the beginning of last year… We’ve worked together five times, the Wachowski’s and I on three Matrix films, V for Vendetta and Cloud Atlas. I’ve hung out with them all over the world for many, many years. So, yes, Lana was very keen for me to be involved in The Matrix. There was a reading with Keanu, Carrie and myself and a few others from the old family.”

Apparently, when it came to it, Weaving wasn’t able to work on the film because of scheduling issues. He was set to work at the National Theatre in London and wouldn’t have been available to shoot for the planned days. Weaving continues:

“I thought we could have done my scenes in May, June and July; and we talked about money and we talked about — they were negotiating… And we were all pretty much sorted and agreed on dates and it was all fine, but then Lana decided she didn’t think it was going to work. So, she pulled the plug on the negotiations. That’s where it ended up. She basically didn’t feel that my commitment to the National Theatre was going to fit in with the dates that she had in mind for me.”

Take not this was all before COVID-19 happened, so maybe there is a chance now to have something work for Weaving. Then again, with all the things already planned for the film, I guess it would just further complicate things if they decided to reintegrate Agent Smith into the story.

For now, The Matrix 4 has resumed production, and we’re all expecting the film to hit theaters on April 1, 2022.