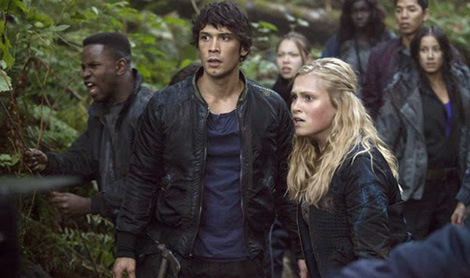 Thanks to The CW we finally have a release date of April 24th for Season 5. It will air on Tuesdays right after The Flash (prime real estate). We should be getting a trailer sometime in March, but if you think the late start is a death sentence no worries, a few spoiler-ly tweets have said that we’ll find out about renewal in May and that The 100 is highly expected to come back for more post-apocalyptic fun.

CW prez Mark Pedowitz said that he is “confident and hopeful” that #The100 will be renewed for Season 6.

Now that we have the date let’s discuss some other recent information that came out. As we saw in promo photos Morley’s character shows he’s changed a lot is Praimfaya When Bellamy and the other survivors from the Ark return home six years will have passed, and now physically Bellamy is sporting longer hair and goatee and a mustache! He seems a lot darker than he was when he was near Clarke and his sister (but maybe that’s because he now thinks they’re all dead until he gets to earth? We can only guess)

In a previous interview, Morley teased that his character would undergo a mass transformation coming into the new season. Since Bellamy had to take over Clarke’s position in the Ark, his leadership skills were put to use. According to Morley, he would want to see Bellamy take on a more proactive role when it comes to deciding what is best and what is not for the tribe.

“I would really like to see him do that,” Morley noted. “One of my favorite seasons was Season 1, even though he was a bit of an idiot and moron and everyone hated him. I liked that he took a strong leadership position whether it’s good or bad, so I would like to see him come back into that. Hopefully this season he does that, [just] not as bad as he was Season 1.”

Many fans have speculated that because of these changes his relationship with Clarke will also change. He may very well forget the alliance and take what he thinks is his, and maybe he’ll be the next leader of Skaikru? After all, he was always known as the second in command next to Clark, and if he gets more loyal followers it wouldn’t be hard to oust her, but then again he has some competition in his sister. As we know Octavia went underground and if the recent photos of her are any indication girl is not there for anyone’s shit, and since there were more people under the ground it’s possible alliances will shift and we’ll see an entirely new power structure when the season finally begins.

What are your theories? Do you think Clarke is in for some trouble this season? Are you excited that we finally got a Season 5 release date? Leave your comments below, and we’ll discuss.