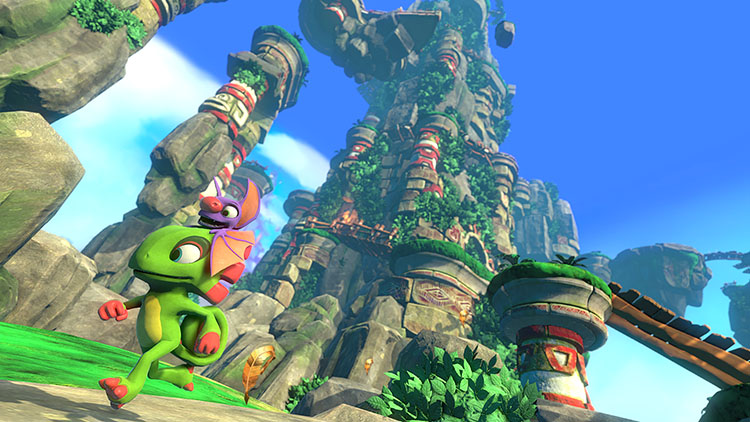 If love is blind and hindsight is 20/20, then nostalgia is somewhere in-between, like the beginning stages of glaucoma. Yooka-Laylee, for those of us who remember the heyday of 3D platformers, can be both a delightful romp through everything that made games like Banjo-Kazooie and Spyro so engrossing, and yet at the same time a reminder of how far we have come since then. At it’s worst, the game is a frustrating, time-consuming vacuum, but at it’s best it is a love song to the type of exploration and discovery that makes the genre so addicting when done well.

The game, which features an array of odd and entertaining characters, centers around an equally odd, and therefore fitting, storyline. The evil Capital B has decided to steal all the books in order to create a monopoly on the book industry—I guess tech isn’t really his thing. But, things aren’t all they seem. One of the books is actually a magical tome called “The One Book” which contains the power to rewrite the universe (because knowledge really is power . . . or something). Unfortunately for Capitol B, that particular book belongs to an even more particular lizard and bat buddy duo who didn’t take kindly to their tome being stolen, and they are out to get it back and save the universe to boot.

As I stated before, there are many things the game does well, but for some players, the flaws will be enough to make you set down the controller for good before you ever reach the end. The controls are not as tight as one would expect from a game in 2017, and likely not even as tight as other 3D platformers of yesteryear. The camera as well, though not the most dysfunctional I have experienced in a game by any stretch, has a tendency to get stuck at the worst moments or fail to adjust adequately at crucial times. In this way, the camera and the controls will often serve as your greatest antagonist. However, aside from certain moments of frustration when facing a particularly difficult feat of platforming, you will eventually learn to curtail the controls for the most part. If you are like me and suffer from what I call “tenacity” (what some people may identify as “stubborn beyond reason”), then this can in some ways add to the challenge. Learning how to time jumps and attacks and other moves is, after all, part of the main challenge of a platformer. Though even for me it could become draining after a while if I came to a point I had to retry over and over due to the controls and camera, and for some, it might be a test of willpower that exceeds their patience.

Seek and you shall find (hopefully)

Speaking of patience, Yooka-Laylee, like it’s predecessors, is a task-oriented game. So, aside from the platforming skills needed to complete your missions, the game also has a never-ending list of things for you to do. These can run the gamut from a sonic-like race to a test of your aiming skills. But, often the player is sent on various versions of a seek-and-find. To move on from one world to the next, or to expand one of the five worlds you find yourself in over the course of the game, the player must collect a certain number of pages (called “Pagies) that escaped from within The One Book. Doing this requires solving puzzles or completing various tasks assigned to the player by characters you run across throughout all five worlds. However, outside of this the player is often required to locate various other collectibles to gain new moves or to advance to certain areas. If you are a completionist, this might be a dream. But, as the game goes on and the numbers required go up, this can also start to feel more like a burden than a good time.

Ooooooooh, and did I mention there are quiz sections (yes, kind of like the ones from Banjo-Kazooie)? This probably felt the most like the developers were impeding progress for no good reason other than stretching game time. That is, unless you love quizzes, and then this might be a major selling point. Whatever floats your boat (as long as I am not in it). Now for the good stuff

All that being said, I found that despite the frustrating falls resulting from hyperactive controls and a sometimes uncertain camera, and even when I had no desire to locate even one more Quill (what you use as currency to buy new moves), Yooka-Laylee was able to keep me coming back again. Why? Because Yooka-Laylee does a fantastic job of capturing everything that was good about the best 3D platformers, even when it doesn’t deliver all the way. The fourth-wall breaking humor, though some might find it a bit trite, is a classic throwback to the 90s. The worlds are full of new things to discover and the player is free to discover them at their pace, leaving them to break open the secrets the worlds hide using only their wits and will (and sometimes abundant amounts of time). In fact, just as the freedom and lack of direction the game offers can be seen as a source of frustration, it is also Yooka-Laylee’s greatest asset.

Freedom is never free (but worth it)

When I was first introduced to the game I did notice the glaring absence of the usual staples like a mini-map (or any map) even just for keeping track of the location of collectibles you still needed to gather, or to help you locate a puzzle you had to leave for later. But, at the same time, I also understand that while a map would have helped shorten the time of the plethora of seek-and-finds, the absence of a map and therefore lack of direction isn’t exactly a negative. It is part of what made some of the older 3D platformers difficult, but also exciting; not knowing exactly what you will find around the corner. I realize this is a point of contention and, perhaps, some direction might have curtailed frustration just enough to boost the game for those with less of a desire to explore literally every nook and cranny, but I think the lack of direction is actually a positive element of the game.

One of the most delightful elements of Yooka-Laylee is being dropped into a world you know little about and then being set free to climb, swim, run, glide, spit fire, use sonar, smash things with your head, etc. Of course, the free exploration doesn’t always pay off. I was once rewarded by a particularly difficult climb with nothing more than finding out what happens when you fall from the top. But other times, a firm spirit of exploration and a willingness to try anything just to see if it there is a reward at the end, does lead you to hidden collectibles.

Of course, there are some limits on exploration based on what moves or abilities you have or have not acquired. This means there is a certain amount of backtracking required. As you play you might notice an area that is currently inaccessible to you, or a puzzle you are currently unable to solve, until later when you acquire the right technique. New abilities and moves are acquired throughout the adventure either through completing certain tasks, or collecting a certain number of Quills or other collectibles. The cool thing is the game lets you choose which ones your characters purchase and when, offering a certain amount of freedom concerning how you build up your character and how prepared you are for each new area. Exactly how far between acquiring the needed move or ability and the puzzle varies, so you have to keep a lookout and pay attention. This can be frustrating, but I found the feeling of learning a new move and suddenly thinking “Oh! I know where I can go use that now!” a very satisfying experience. Conclusion: What a wonderful world

The worlds of Yooka-Laylee are vibrant and even breathtaking at times in all their cartoony splendor. The characters you run into are strange and varied, meaning you never know who (or what) you are going to run into with each new discovery. Of course, not all words are created equal and one in particular (the Casino world) seemed full of empty space and lost opportunities. But, overall, the worlds of Yooka-Laylee will draw you in and keep you coming back for more if you are willing to invest the time.

In fact, my biggest complaint about Yooka-Laylee is that there wasn’t enough to explore. The five worlds outside the hub world are indeed full of collectibles, and puzzles, and delightfully bizarre characters, but I wish my off-road escapades had been rewarded a bit more often. You do have the ability to expand the worlds by collecting the right number of Pagies, which is a delight to behold as you suddenly have access to new areas to explore. But, even then, I wish there had been at least one or two more worlds, or the worlds had been larger. But, perhaps that will be solved in the next big project from Playtonic Games (and I do hope there is another).

The ability to adjust controller sensitivity, a more refined jumping mechanic, and a map that can be used to mark locations the player wants to remember or the location of certain items would definitely have helped Yooka-Laylee lessen player’s frustrations. But, the worst aspects of the game like lack of direction also constitutes some of the game’s strongest points. In part, while I agree improvements need to be made, this freedom and difficulty are a part of the challenge. It is in some ways a matter of mindset. Will you accept the challenge? Can you invest the time? If so, then Yooka-Laylee, while imperfect, offers up something that is rather rare (see what I did there) nowadays, and is a delight I hope we get again, maybe with just a few improvements . . .and fewer Quills to collect.

Yooka-Laylee offers a great deal of what made classic 3D platformers so addicting. Yes, there are some frustrations like the controls and seemingly endless seek-and-finds, but for someone looking to invest time into a game that gives the player quite a bit of freedom for exploration, Yooka-Laylee hits the mark.