We’re in the age of spin-offs at the movie theatre, and the next franchise to come from the X-Men universe looks like it will be Multiple Man, starring none other than James Franco himself. Multiple sources have come out saying that 20th Century Fox will be pushing the film through along with X-men: Dark Phoenix, Gambit, New Mutants, and last but not least, Deadpool 2.

According to a report by Deadline, Franco will be producing the film himself through his company Ramona Films and along with Simon Kinberg, an XCU architect who has helped him hugely with previous projects. Ramona Films also produced the actor/director’s film The Disaster Artist, which came out of the film The Hardy Men – a collaboration between Franco and Kinberg that looked into the crime-fighting Hardy Boys all grown up.

The late Len Wien initially conjured up Multiple Man in 1975 in the fourth installment of the Giant-Size Fantastic Four comic series’ first volume. Jamie Madrox. AKA the Multiple Man, has the power to clone himself, making him both an X-Men at times or a criminal, depending on the different manifestations Multiple Man has taken on over the years.

The movie will most certainly have a comedic tone, especially with James Franco as the leading man. It’s looking like another take on Deadpool, but a cleaner one. Then again, you never really know what’s going to come out of Franco’s mouth. 20th Century’s latest box office successes have definitely taken a turn down a grittier and more R-rated path with movies like Deadpool and the critically acclaimed Logan. 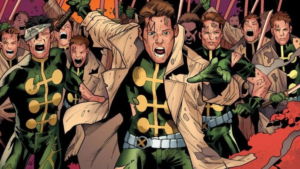