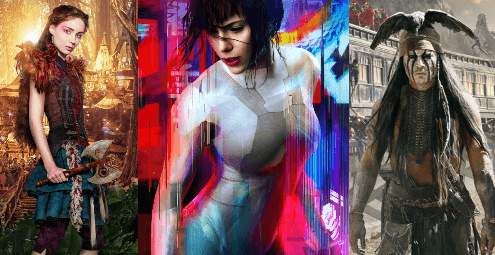 For years and years, Hollywood has been telling audiences that “whitewashing” (taking a fictional or non-fictional character with a traditionally non-white ethnicity and turning them white in a specific portrayal in media) is a necessary evil. That certain franchises are considered popular enough to warrant multi-million dollar adaptations, but need to have their cultural origins stripped away in order to become commercially viable. Director Ridley Scott, when asked about casting white-actors as Ancient Egyptians in 2014’s Exodus: Gods and Kings said he couldn’t “mount a film of this budget…and say that my lead actor is Mohammad so-and-so from such-and-such.”. Paramount Pictures‘ domestic distribution chief Kyle Davies recently talked about the new live-action adaptation of Ghost in the Shell starring Scarlett Johansson as an originally Japanese character and how the casting had to honour the source material and also “make a movie for a mass audience”.

But has whitewashing ever actually worked in regards to making a film a box-office hit?

This is the question we must ask ourselves in response to Ghost in the Shell opening to a vastly lacklustre $19M on a production budget of $110M. Now, just to be clear, this article is not talking about the ethics of white-washing, nor is it about whether or not it’s ever appropriate. Instead we’re going to examine how we’re constantly told that white-washing “needs” to be done in order for these movies to have a fighting chance at the box-office. But there’s actually no evidence to support that line of thinking.

Cast your mind back to some of the more high-profile cases of whitewashing over the past decade. White actor Justin Chatwick portrayed the character of Goku in 2009’s Dragon Ball: Evolution based off the Japanese manga series Dragon Ball; white actors portrayed Asian characters in M. Night Shayamalan’s adaptation of Avatar: The Last Airbender in 2010; Jake Gyllenhaal portrayed The Prince of Persia in 2010; Keanu Reeves was meant to be half-Japanese in 2013’s 47 Ronin, and Johnny Depp played Native American Tonto in The Lone Ranger that same year. We also have the aforementioned Exodus: Gods and Kings; Emma Stone played a quarter-Chinese and quarter-Hawaiian woman in 2015’s Aloha (sorry for making you remember that Aloha exists); Rooney Mara played a native American warrior in Pan, LGBT people-of-color were almost entirely erased from history in Roland Emmerich’s Stonewall biopic; a mostly-white cast portrayed Egyptians in Gods of Egypt last year, and now we have Johansson as a Japanese character in Ghost in the Shell.

Apart from the whitewashing controversies, what do all of the above movies have in common? They all flopped hard, under-performing significantly at the box-office to the extent that they are now considered total bombs. Despite all of these films losing studios money and despite all the free publicity these movies got from the controversy, why are studios utilizing these templates to try and make box-office gold? Doing the same thing over and over again but expecting different results is the textbook definition of insanity but it’s literally happening in Hollywood year in year out.

Casting A-Lister Depp in The Lone Ranger did not automatically turn it into a Pirates of the Caribbean-style success, and as much as Scott may protest, I’m certain that him deciding to cast Bale as opposed to “Mohammed so-and-so from such-and-such” didn’t affect the box-office performance of Exodus: Gods and Kings one iota.

Last year, Disney’s remake of The Jungle Book opened with an unknown, non-white child actor in the lead, and that movie opened four-times higher than the white-washed Exodus: Gods and Kings starring Bale. One can argue, of course, that The Jungle Book opened bigger because it was based off a well-known source material. On top of that, it was a technical marvel with great reviews and a strong supporting cast. Its box office success was not because of its lead actor. Exodus: Gods and Kings flopped because it was poorly marketed and got bad reviews. If you argue that point, you are absolutely correct, and in arguing that, you have proven my point.

There are many factors to consider when wondering why white-washed movies have flopped at the box-office. Poor reviews, the wrong source material, bad marketing, mismanaged releases etc. The ethnicity of the cast was most likely not the cause of these films losing their respective studios money. But that seems to prove that putting a white A-list actor in the role isn’t some magical golden ticket to box-office success. In response to the initial whitewashing controversy surrounding Ghost in the Shell, director/writer Max Landis made a video saying how the film would never have gotten green-lit without getting someone like Johansson to lead it. If that’s the case, then it proves that Hollywood is drawing from provably broken metrics because this strategy just does not work.

In the interest of fairness, there are two recent films that had whitewashing controversies that did well at the box-office; last year’s Doctor Strange, and 2008’s 21. The latter tells the true story of how a group of students earned millions of dollars in Las Vegas by card-counting. In real life, the story revolved around Asian-American Jeff Ma but in the film he was replaced by the fictional Ben Campbell and portrayed by white English Actor Jim Sturgess. The film cost $35M to make and earned a respectable $157M worldwide, though the reviews were mixed. As for Doctor Strange, his big-screen debut movie replaced the traditionally Asian “The Ancient One” with white actress Tilda Swinton. That film cost $165M and earned $677M globally.

Both films managed to be profitable in spite of the controversy, but 21 was mainly carried by its true story, and its modest budget allowed it to become a mid-tiered success. Sturgess is a good actor, but let’s not pretend that 21 was a success because he portrayed the lead. No one has ever uttered the sentence “Let’s go see the new Jim Sturgess movie!” and I mean no disrespect by that. As for Doctor Strange, it was able to sidestep some controversy by gender-swapping The Ancient One, while also portraying the traditionally white character of Mordo as black by casting Chiwetel Ejiofor. Doctor Strange was also based off a comic book property and part of the increasingly lucrative Marvel Cinematic Universe, and the ethnicity of the Ancient One was not going to change that. Properties, brand recognition, effective marketing and high-concepts sell films far more than the skin color of the lead character.

Finally, look at recent box-office hits like Get Out; Hidden Figures; Moonlight; Big Hero 6; Moana, and the billion-dollar Fast & Furious franchise. There’s clearly massive demand for movies that portray non-white characters, or depicting non-American cultures and diverse ensembles. The success of these films can’t be entirely chalked up to these elements, but once again it just shows that putting a culturally insensitive, poorly-thought out bird hat on Depp and saying he’s 1/16th Native American won’t guarantee a return on a $500M investment in The Lone Ranger. If Hollywood keeps relying on this provably false “strategic casting” they’re likely going to have more and more and more flops.

Pan didn’t lose Warner Bros. an estimated $150M because they whitewashed Tiger Lilly and The Lone Ranger didn’t lose Walt Disney Pictures an estimated $190M because they denied an actual Native American the opportunity to portray Tonto. But conversely, those casting decisions did nothing to help either. Whitewashing for artistic reasons can and should be argued for or against. Whitewashing for box-office success is the new definition of insanity.