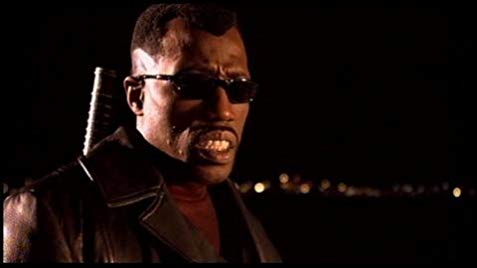 It has been over a decade since the last of the Blade trilogy, Blade: Trinity, was released. However, with the possibility of a fourth movie, the cast and crew of the franchise have recently made their way to the news cycle. Unfortunately, not all updates have been great and drama free.

Patton Oswalt, the actor who played Hedges, previously spoke about Wesley Snipes aka Blade’s less than stellar attitude on set. In an article released in 2012, Oswalt revealed that Snipes would rarely leave his trailer. In one of the very few times that he did, he almost stranggled the director, David Goyer:

“Then I remember one day on the set- they let everyone pick their own clothes – there was one black actor who was also kind of a club kid. And he wore this shirt with the word ‘Garbage’ on it in big stylish letters. It was his shirt. And Wesley came down to the set, which he only did for close-ups. Everything else was done by his stand-in. I only did one scene with him. But he comes on and goes, ‘There’s only one other black guy in the movie, and you make him wear a shirt that says ‘Garbage?’ You racist mothefucker!’ And he tried to strangle the director, David Goyer” explained Oswalt .

It took several years for Snipes to respond to the allegations.  In a recent interview with Vice, the actor explained that since the production of Blade: Trinity he has spoken to Goyer. He isn’t sure if there is bad blood but he knows that the outcome of their paring was great:

“I think we talked sometimes, somehow, somewhere. I don’t fault him. I don’t fault anybody. That’s just what it was, man. Nobody thought that the Blade stuff was gonna pop off in the first place. It was an anomaly. All of it was an anomaly. It just happens over time. Nobody knows who was the one who struck gold, but everybody claims it. So, he did what he had to do. We did what we did based on what we knew at the time and that was the way it was. It’s a wonderful thing where you can look back and say, hey, at the end of the day we still did something great.”

In the same sit-down, Snipes briefly spoke about the development of Blade 4. He explains that there has been ongoing conversation regarding a fourth installment for years. While he isn’t sure when the movie is going to see release, Snipes knows that Blade 4 would be more epic than the first three movies combined:

“All the main execs [at Marvel] and my team, we’ve been discussing for the past two years. Everyone’s enthusiastic about it, everybody gets it. But they got a business to run and they gotta square the things that they gotta figure out before they can get to it, I guess. In the meantime, we got a business to run and our own slate of things to do so… But the next time you see something in [the Blade universe], mark my words: what we did before is child’s play compared to what we can do now.”