The Walking Dead’s sixth season ended on a massive cliffhanger that greatly upset many fans. Producers were quick to assure audiences Negan’s victim would be revealed in the Season 7 premiere. From the first image EW has debuted, it appears as though the show will pick up exactly where it left off. Check it out below. 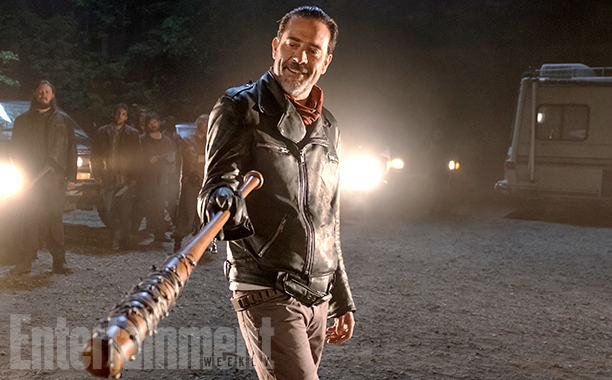 Negan and his trusty death-bat Lucille have certainly finished the Season 6 defining deed. “Yes, who was at the receiving end of Negan’s bat will be revealed in the first episode,” confirms executive producer Greg Nicotero. The image makes it looks as if he’s teasing whoever’s left in Rick’s group. He definitely likes to talk, as seen in the finale, but it won’t stop there. According to Nicotero, plenty more is to come in Season 7.

“Negan is that kind of guy,” says Nicotero. “He’s the kind of guy who imagines himself on stage at a high school production and he loves every second of it. So, I don’t really see a lot of quiet contemplative moments with Negan. I feel like with Negan it’s really going to be about him gesticulating and him sort of relishing in the sound of his own voice while he commands the stage in front of whoever’s alive.”

The show’s San Diego Comic-Con panel is set to reveal more information on July 22. There, the cast and crew will discuss how the show follows the cliffhanger and where it will go next.

The Walking Dead Season 7 doesn’t have a premiere date, but it will likely begin airing in early October.