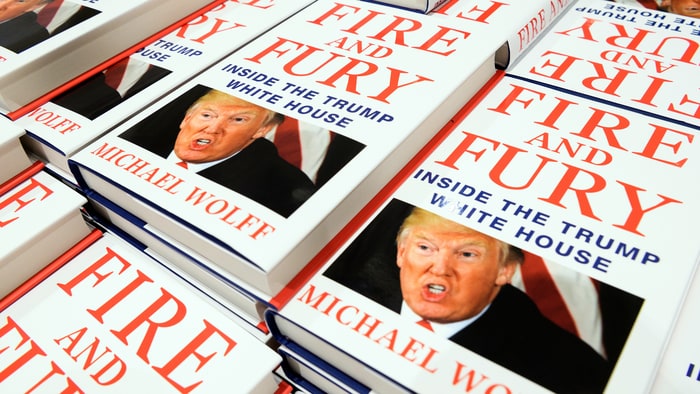 Lord save us all! It’s a bit early, but reports are saying Michael Wolff’s book ‘Fire and Fury‘, which details the first year of Trump’s White House is not only going to be one of the biggest books of 2018 but is also now going to be turned into a TV show according to reports from The Hollywood Reporter. Apparently, Endeavour Content has purchased the film and TV rights to the novel and is planning to adapt it as a TV series.

There’s no network attached yet, but considering the ratings around Trump and the fact that he’s done wonders for SNL, we wouldn’t be shocked if a Network like NBC picks it up or even Netflix.

There are currently no details though it is being reported that author Michael Wolff will be involved with the controversial TV series as an executive producer and that the deal for the rights was somewhere in the “seven-figure range.”

You may know Fire and Fury almost wasn’t a hit until excerpts from the book hit online detailing some crazier moments like Trump’s love of McDonald’s. Because of the sensationalism of the excerpts, some fans have argued that Michael Wolff’s reporting on the book must be fabricated, however, skeptics of Trump himself believe that many points make sense, especially when compared to all the firings and random tweets he’s made the past year. This means that whatever may happen the TV series is sure to be met with the same controversy as the book and most likely that would be very good for ratings, though it’s hard to say if a network would be able to get advertisers on board since many publications have lost advertisers over the controversial president.
HBO had also planned a series around the 2016 presidential election, but it was scrapped when co-author Mark Halperin was accused of sexual misconduct, thus allowing ‘Fire and Fury’ a chance at the small screen.

What do you think should ‘Fire and Fury‘ be a tv show? We kind of thought it would be a movie at least or perhaps a comedy based on what we’ve read so far, but hard to say. Let us know what you think in the comments below.