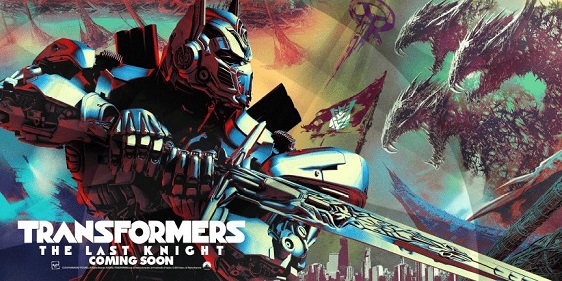 Paramount was kind enough to invite us along to a special preview of selected footage from the June 23rd blockbuster, Transformers: The Last Knight. Introduced by the orchestrator of Bayhem himself, Michael Bay, who pontificated about how he’s trying to keep 3-D alive by filming The Last Knight in native 3-D, before it switched locales to him sat amongst some long grass, as if Terence Malick had asked him to sit still for five minutes. Whilst there he informed us that what we were about to see were a few scenes, most featuring pre-viz effects, to get a flavour of what to expect from his final instalment of the Transformers franchise.

The 25 minute showreel opened on the Paramount logo, behind from which emerged a series of huge fireballs that rotated 180 onto a Saxon battlefield. Obviously, being a Michael Bay film, these landed and exploded, tossing numerous extras into the air. Managing to stay on horseback is King Arthur (Liam Garrigan), who speaks of the powerful wizard Merlin. Pan to the famous necromancer, played in this flashback by Stanley Tucci, who appears to be absolutely battered, confirmed by some inaudible dialogue about being sozzled. This part felt the most incomplete portion of the footage, and therefore the least impressive, but it did end with Merlin facing off against a flying hydra beastie of some sort.

Next we’re with the group of kids we’d seen in the trailer, who’re exploring the concrete wasteland looking for Transformer bodies. When they appear to awaken a sleeping bot, it brings them to the attention of some ED-209 meets AT AT style robots, but before they’re obliterated, in steps Isabela Moner’s Izabella, followed shortly afterwards by Age of Extinction human holdover, Cade Yeager (Mark Wahlberg). There’s running, there’s shouting, boy is there shouting, and the introduction and demise of Canopy (shown in the trailer too), a wonderful turtle like Transformer who emotes more than most have been allowed to in this franchise thus far.

Our next scene was another extended version of a trailer sequence. This time it’s the cartoonish buffoonery of Grimlock, now reduced to a junkyard pet dog for Cade Yeager’s shouty owner. Did I mention there’s a lot of shouting? He’s being yelled at by Wahlberg for eating a car. This segment also introduces Jerrod Carmichael’s character, Desi, who appears to be comic relief, because he spends the subsequent action scene, one which involves mini-Tie fighters attempting to track down Yeager and Izabella as they hide out in a building, cracking jokes.

The three of them are then seen riding an elevator that has a robot concierge, who proceeds to push Wahlberg through the glass window. It soon transpires that this robobutler works for Anthony Hopkins, Sir Edmund Burton, whose voiceover has punctuated a few of the scenes. We’re then transported to the grounds of his estate, where he’s walking his dog whilst guarded by an antiquated tank Transformer, and we kid you not, uses the word ‘bitchin’. What’s clear from all of the clips featuring Hopkins is that anytime he’s on-screen, it’ll be brilliantly bonkers. It doesn’t look as though he’ll simply be regurgitating his WestWorld pomposity in a different robot playground, because all of the snippets here show him having fun, and it translates to the audience.

This introduction extends to that of Laura Haddock, who’ll be playing the Cade Yeager name trumping, Vivian Wembley. We see the three of them squabble playfully for a bit and then we’re back in Ye Olde England as Burton explains the link between the Knights of the Round Table and the original Transformers.

These bits were arguably the strongest of the entire preview, largely because they weren’t raising their voices, but also because it was genuinely enjoyable stuff, with some pretty funny lines.

We got one more fade-to-black before the final flourish kicked in, most of which revolved around Optimus Prime, a lot of quick edits featuring shots from the trailers, before we see Bumblebee smackdown on Prime, and cue title card: Transformers: The Last Knight.

It’s hard to take much from these kinds of events in terms of the final film, but this does feel like more of the same, and incoherence is something Revenge of the Fallen, Dark of the Moon, and Age of Extinction struggled with, so the choppy nature of this snapshot doesn’t help alleviate such fears. However, as a staunch supporter of the first Transformers film, a movie that benefitted from the hands-on influence of Producer, Steven Spielberg, I hold out hope that Bay can bookend his tenure of the franchise with his two best films.