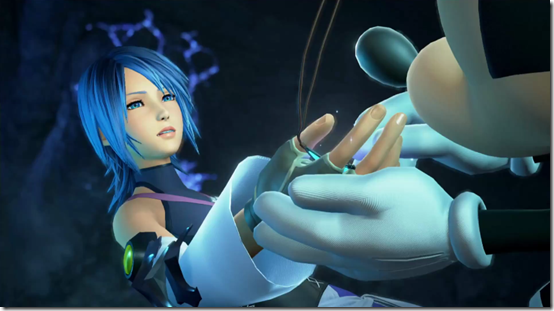 The third installment of the Kingdom Hearts‘ HD re-releases is coming soon and TGS has given us a new trailer until this highly anticipated game is available. Here’s the new trailer for Kingdom Hearts HD 2.8 Final Chapter Prologue (and I thought that 358/2 Days was a mouthful):

“Check out the latest Kingdom Hearts HD 2.8 Final Chapter Prologue trailer. It includes never-before-seen scenes depicting a mysterious meeting of the “Foretellers”, the five Keyblade Masters from the Kingdom Hearts origins movie included in the compilation as Kingdom Hearts χ [chi] Back Cover. The trailer also features HD remastered gameplay of Kingdom Hearts Dream Drop Distance HD and new battles scenes from Aqua’s adventures in Kingdom Hearts 0.2 Birth by Sleep – A fragmentary passage –. During the trailer you will want to listen out for the newly remixed version of “Simple and Clean” by none other than Utada Hikaru herself.”

It’s been almost 15 years since the release of the first Kingdom Hearts game. Square Enix partnered with Disney to created the cult classic that now many KH fans eagerly await the sequels of. While its major sequel, Kingdom Hearts 3, is still in development, Kingdom Hearts HD 2.8 is paving the way towards the completion of this massive video game trilogy. Originally, KH 2.8 was slated to have a worldwide release. However, Square Enix USA announced a month-long delay on Twitter. The game will now launch on January 24, 2017 in the US.

Unlike the last two HD incarnations, this game will include a lot of new content. Alongside the HD remaster of Kingdom Hearts 3D: Dream Drop Distance, there will be a whole new addition to the story titled: Kingdom Hearts 0.2 Birth by Sleep: A Fragmentary Passage. The segment will focus on Aqua’s story after the Birth by Sleep PSP game. The game will be completed with Kingdom Hearts X Back Cover, a prologue movie that explains the origins of the in-game Keyblade War.

Also, the official KINGDOM HEARTS HD 2.8 Final Chapter Prologue website has confirmed there will be downloadable content for this game. What this DLC will be is still a mystery.

What this small delay means for the release of Kingdom Hearts 3 we don’t know, but KH fans are the most patient fandom you’ll find on the internet (next to Sherlock fans).

Kingdom Hearts HD 2.8 Final Chapter Prologue will be available for Playstation 4 on January 24, 2017 in the US.