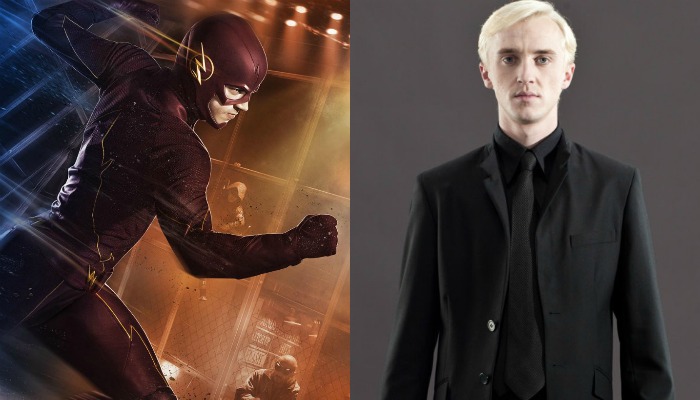 Fans are mostly focussing on the fact that The Flash season 3 will adapt alternate universe story “Flashpoint”, but we shouldn’t forget that the next run of the superhero show will also see Harry Potter star Tom Felton join the cast. Though we know that Felton will play Julian Dorn, another forensics expert who is suspicious of Barry, we don’t know too much about him. Will he turn out to be friend or foe, for instance? Obviously, we expect the former Draco Malfoy to be a bad’un, but that’s not necessarily the case.

Over this weekend’s San Diego Comic-Con (at which an awesome first look at season 3 premiered), ComicBook.Com caught up with the actor to get some scoop on the nature of Julian Dorn. Watch what Felton had to say below:

Here’s his answer to whether Julian is a bad guy or not:

“I don’t know. I mean…they came to me for a reason. I’m not sure what that reason is yet. I know there’s going to be some serious material to sink my teeth into at some point. Like you said I think he’s suspicious of Barry’s position.

I also think he’s as smart as Barry. At least in the forensic world, Barry’s not used to having a mind as sharp as his around — and he has a smug air of superiority, I think, over Barry. So, hey, it lends itself to many different choices and many different storylines. It’s not really worth speculating because I’m sure the writers have something much cooler in mind.”

So what do we think? Has Felton been cast for his previous experience at portraying a rival character, or to play against his public image as a villain?

We’ll find out when The Flash returns on Tuesday, October 4.

Images via The CW/Warner Bros.