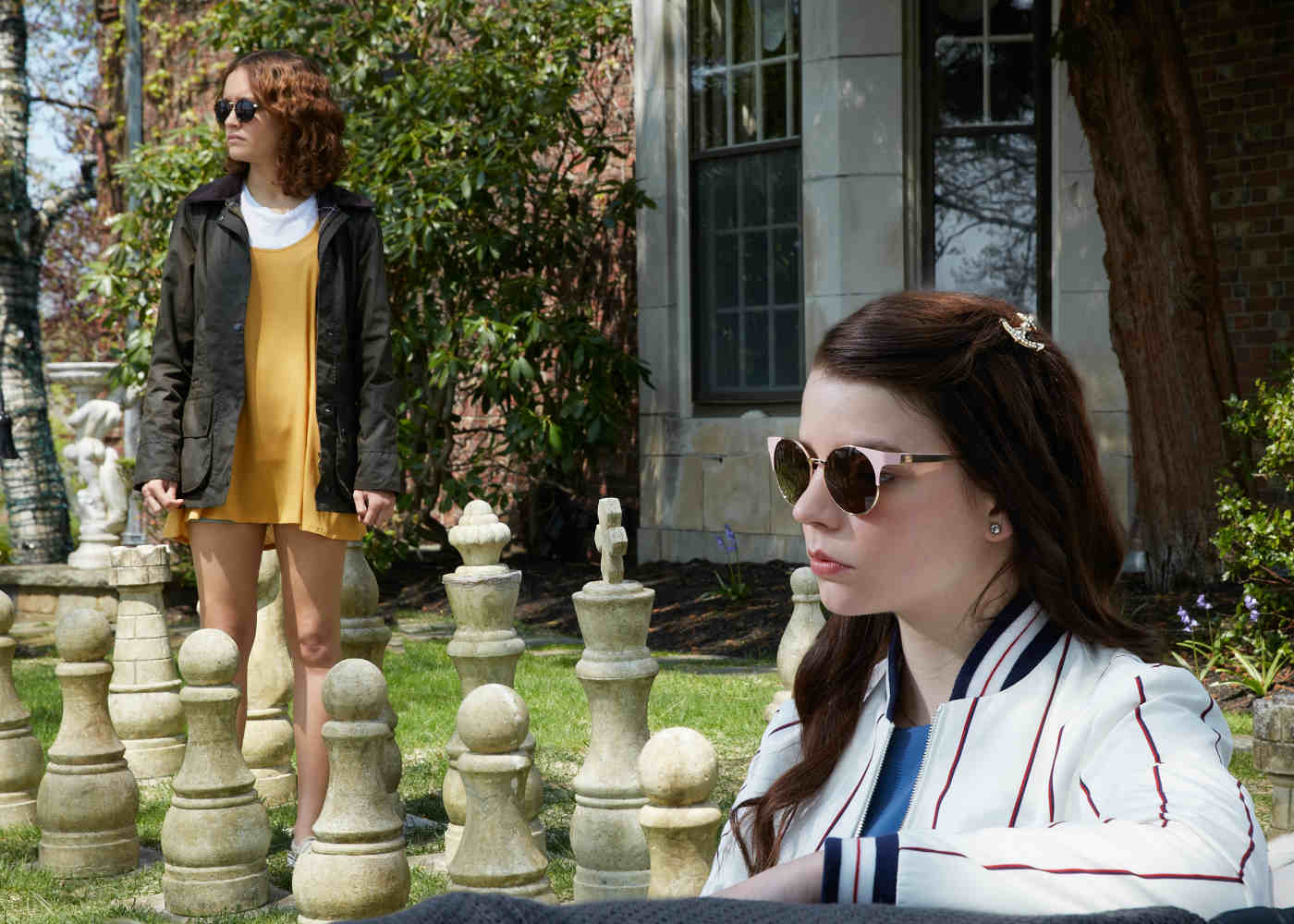 Corey Finley‘s directorial debut, Thoroughbreds, is a creepy delight to sit amongst its obvious forbearers, Heathers and Heavenly Creatures, as a story of something wicked this way comes, which on this occasion is in the form of hypnotic duo Olivia Cooke (The Limehouse Golem) and Anya Taylor-Joy (Split).

Having rekindled a childhood friendship under the guise of being her study tutor, preppy Lily (Taylor-Joy) is confronted with Amanda (Cooke), who comes across as a somewhat robotic, dead-behind-the-eyes sociopath. The fact she euthanised her own horse during an incident that has achieved notoriety amongst the palatial houses and expensive schools, only adds to the feeling of discomfort surrounding her pupil. Lily’s existence isn’t exactly a happy one, with a mother who locks herself away in a sunbed, and a step-father (Paul Sparks – Boardwalk Empire) who barely tolerates her haunting their expensive house. Slowly she begins to feed off Amanda’s pitch-black outlook on life, and together they rope in Anton Yelchin’s skeezy drug dealer to sate eachothers darkest desires.

In what could easily be a stage-play, with its single-location setting, chaptered structure, and small cast, Thoroughbreds would be deserving of a lengthily standing ovation.

Before taking a look at the cast, it needs pointing out that the most impressive character is in fact the music. Erik Fredlander’s score does as much to unsettle, provoke, and overwhelm as the actions of the main players. It veers from ominous, to playful, to downright unsettling with its use of strings and percussion, and is one of the best use of soundtrack since There Will Be Blood.

Working in tandem with such macabre orchestration are the excellent cast, and while its tinged with sadness to watch Anton Yelchin deliver a wonderful against type turn, and Sparks periodically loom into shot with ludicrous menace, Thoroughbreds is owned by the impressive two-hander of Taylor-Joy and Cooke. The latter is a foreboding spectre, described as being “incredibly off-putting“, which is perfect for her portrayal of a brown eyed empathy void. Matching her in the murky eyed department is the bewitching Taylor-Joy, who has more of an evolutionary arc to play with, mainly because her character can actually experience emotion, but along with her co-star, they achieve great things with minimal effort. The power of a final reel smile from Cooke is one that’ll make you grin, whilst simultaneously shifting in your seat.

The dark streak running through Finley’s film makes for some memorable comedy; a scene in which Amanda teaches Lily to cry after they’ve been deconstructing the performance in a film they’re barely watching, is an awkward gem, as are most of their early exchanges when Lily is trying to adjust to Amanda’s abrasive attitude. There are so many smart observations as the characters strip away the superficiality of the world they’re living in and tell it like it is. Their acts might be despicable, but there’s a refreshing streak of honesty to the way the characters are written.

Thoroughbreds is such a guilty pleasure. Gasps of delight will sit uncomfortably alongside those of horror, but you’ll enjoy them both equally. Taylor-Joy, Cooke, and Yelchin, along with an absolutely stunning soundtrack, make this the most welcome dark surprise for many a year.