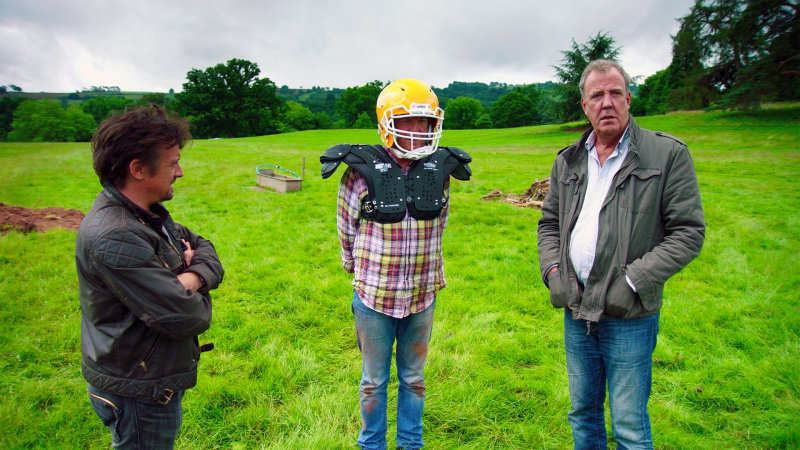 Tasked with creating the most environmentally friendly cars they possibly can, Jeremy Clarkson, Richard Hammond and James May take to the Welsh countryside in motors made of dead animals, grass and vegetation, and mud and bricks. It’s difficult to imagine even the Duffer Brothers coming up with something quite so strange, and yet it’s the main source of fuel behind the fourth episode of Amazon’s already wildly successful first season of The Grand Tour.

Top Gear certainly threw up some pretty bizarre challenges for its three hosts to undertake, but it’s unlikely that Enviro-mental’s central film would’ve been considered fit for broadcast on terrestrial television. The presenters don’t shy away from the fact that Clarkson’s windscreen has been made from the innards of a cow’s bottom, the wing mirrors are a bovine’s ears, and his vehicle is at one point brought to a halt by an infestation of maggots on the engine. Clarkson muses that viewers “may be amused – or horrified” and he’s certainly not wrong.

The sheer ridiculousness of it all actually works, though. The Grand Tour has so far felt scripted in the extreme and to the overall detriment of the show. Most of Enviro-mental is similarly staged, but it’s far closer to the more grounded absurdity audiences used to love about Top Gear. We don’t see the trio pretending to fight terrorists, which will forever be a stain upon what has so far been an entertaining enough series.

May’s trials and tribulations in trying to get his own eco car up and running is where much of the hilarity lies this week. Watching him drive through the countryside in a car made of mud as it slowly falls apart around him is certainly amusing, as it is when a body made of poorly cemented brickwork collapses on top of him. He proceeds to get stuck in a river, hearkening back to Hammond’s tragic attempts to save his beloved 1963 Opel Kadett named Oliver in 2007’s classic Top Gear Botswana special. Hammond himself channels his inner Snow White here, with hedgehogs and mice calling his grassy car home.

The film comes rounds out with the three environmentally sustainable cars taking on more traditional motors in a race, which ends about as well as you might expect. The main takeaway from Enviro-mental is actually the fact that The Grand Tour is – believe it or not – far more at home back in Blighty than it was in either California or Johannesburg. Once again stationed in Whitby, the live audience of locals allows Clarkson to go off on rants about Tripadvisor and traffic lights in London.

It’s become increasingly clear that segments like Celebrity Braincrash and The American have been designed to appeal to their worldwide audience that frankly don’t care about the nature of the police force in Yorkshire, but they are still the weakest parts of the show. This week’s famous guest is Jimmy Carr, who anyone outside the UK probably doesn’t know of anyway. You get the impression that these elements are here to stay because of production decisions made some time ago, so we can only hope that they don’t see the light of day in the show’s second season.

Believe it or not, there is some actual ‘motoring journalism’ this week, too. Clarkson test drives an immaculate Porsche and an admittedly disappointing BMW, with the superb cinematography once again making these expensive machines look more worthy of a place on the cover of Playboy than on any car magazine. In wonderfully banal fashion, Clarkson advises viewers that the BMW is the one to buy purely because the Porsche is owned by Hammond.

Despite the more dysfunctional elements robbing it of its momentum more often than you’d like, The Grand Tour’s fourth episode serves up a good chunk of the grounded insanity that made old Top Gear such a hit.