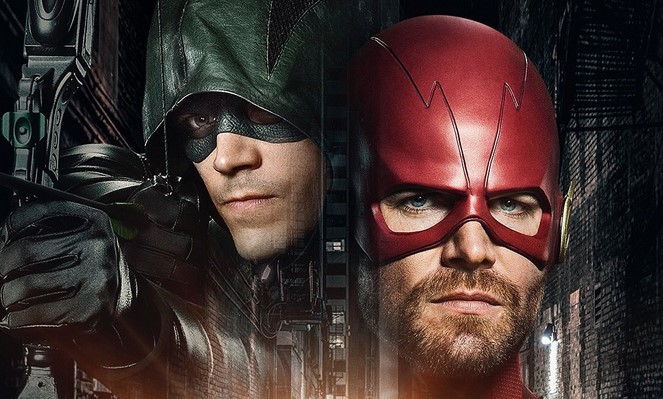 The Arrowverse is gearing up for a crossover event this December, and besides the introduction of a new Batwoman, we’re getting some alternate reality storylines with the upcoming Elseworlds. Stephen Amell just shared this new poster for the event, and it has him swapping roles with Grant Gustin who originally plays The Flash.

My name is Barry Allen and I am the fastest man alive. pic.twitter.com/TibqsR7mT8

Just in case you didn’t know, DC comics has a brand for their alternate reality stories called Elseworlds, and like it sounds, it deals with stories set in the DC Universe that have one or two elements changed, making alternate worlds. A few stories that fall under the Elseworld banner are comics like Batman: Gotham by Gaslight and Superman: Red Son.

This is just me, but I have a feeling that The CW has decided to pull off this crossover because of the upcoming Joker movie. Despite the main DCEU timeline with Jared Leto’s Joker, WB has decided to greenlight a Joker film set outside of the main timeline—presenting us with an alternate reality Gotham. I’m curious if it was that decision that pushed the Arrowverse to embrace alternate realities as well.

Then again, alternate reality storylines are a staple of any TV show, and I thought it was a matter of time before it came to The CW’s DC Universe.

I’m actually pretty excited to see what’s in store for Elseworlds in the Arrowverse. For one, we already have an image leaked of Superman (Tyler Hoechlin) wearing a black suit with silver ‘S’. Like I also said, this crossover will introduce us to the new Batwoman being played by Ruby Rose.

The Elseworlds crossover event will take place three nights, starting on Sunday Dec. 9 with The Flash, followed on Monday by Arrow, and ending with Supergirl on Tuesday.