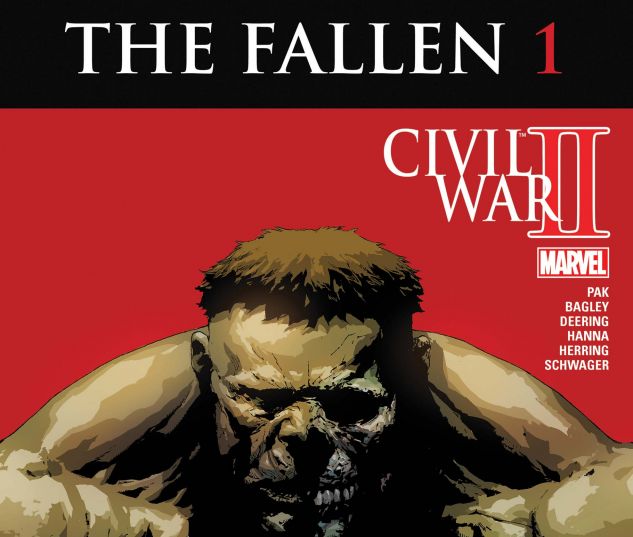 If you haven’t been keeping up with Marvel’s latest comic book event, Civil War II, then be warned that this review of The Fallen will carry some major *spoilers*.

To quote the most famous frog in history: “It’s not easy being green.” I know, it’s a lame joke, but now that I got that out of my system I can tell you how sad it is to read a comic book that focuses on the aftermath of someone’s death. The stakes get tested in events like these usually by killing off major characters during battles, but the incredible Bruce Banner wasn’t killed in action. He was killed to prevent any action. That is the basic, moral dilemma that Civil War II carries: If you know what’s coming, do you tamper the future or do you allow it to happen?

Hulk was definitely a liability most of the time. His rampaging tendencies cost the lives of many; that’s why the angry mob that forms just outside the funeral makes sense. The Hulk’s Planet Hulk comrades have a huge part in this issue as well as Rick Jones and Betty Ross. The Hulk family focuses on keeping themselves under control and remembering the good that Hulk did in their time of grief. Everybody was worried about rampaging outbursts, and I was too, but most of the reactions are very heartfelt. Skaar’s reaction is my favorite.

I do wish Clint Barton had shown his face at the funeral after being acquitted. I’m sure tensions would run high if he had showed, but seeing as how he killed Bruce, I want him to show just a speck of regret. There isn’t a lot of negative things I can say about this book, it is spectacularly written and Bagley’s art makes me miss Ultimate Spider-Man even more. I have just one question, though: Why do superheroes go to funerals in their costumes? Someone once told me that it’s the same reason people in the military wear their uniforms to funerals. I can understand that sentiment, but they just look ridiculous.

The Fallen is a very emotional issue and chapter in the Civil War II story. The recorded will that Banner leaves behind is just heartwarming. Over the years I haven’t read too many Hulk comics, but the history between all these characters is palpable in this one issue. This makes me want to know how they will move forward with their lives now that Bruce Banner is gone?

“As a giant falls, friends and enemies alike gather to mourn his passing. Amadeus Cho, Rick Jones, Betty Ross, Thunderbolt Ross, the Warbound and more. Can they all keep a level head – or will some of them get ANGRY? Plus, what secrets lie in the Last Will and Testament of Bruce Banner?

The Hulk family gets smaller but this book does a great job of showing how close, heartwarming and non-threatening they can be.