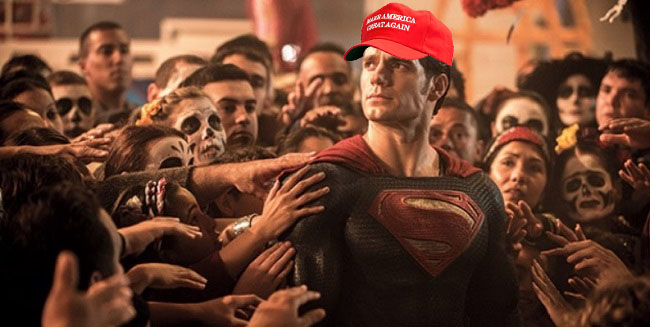 In the age of comic book movies, The Boys manages to be a fantastic satirical look at the superhero genre. With the last season outright dealing with Nazis and white nationalism, showrunner Eric Kripke explains why he thinks all the ‘classic’ superheroes are ‘inherently MAGA’.

Talking to The Hollywood Reporter, Kripke was asked about where Homelander lands on the spectrum of white nationalism, to which he replies:

A few things: The myth of superheroes themselves — though often created by young Jewish writers in the ’30s and ’40s — doesn’t really apply as cleanly today, because there’s these undeniable fascist underpinnings to it. They’re there to protect white, patriotic America. That’s what they were designed to do, that’s what they do. They’re protecting the status quo. When the status quo is problematic, suddenly they become adversarial — not your hero. And I think it was written by a lot of people who at that time were trying their level best to fit in and vanish within white, American society.

Seeing that the status quo has become the object of scrutiny today, what with #ACAB and Black Lives Matter, the more traditional superheroes like Superman and Batman now look to be protecting a flawed system—and that’s what The Boys is trying to poke at.

But we just don’t live in that time anymore. So the myth of the superhero taken straight, that’s where it starts to become fascist. Because they’re protecting a world that doesn’t and shouldn’t exist. Superheroes are inherently MAGA. In terms of Stormfront, there was nothing specifically personal behind it. It was just, I hate Nazis. I hate alt-right white nationalism. I hate racism in all of its forms.

This is actually a pretty interesting take on heroes, and while I’m sure some people can name out some exceptions, you can’t deny that the traditional superheroes of the golden age were built on that belief. I guess now it’s the responsibility of artists and writers of this new comic book material to make sure that these heroes evolve along with the times and send a message that is more relevant than what they were saying back in the 50s.

For now, catch Kripke’s irreverent take on supes with The Boys on Amazon Prime Video.