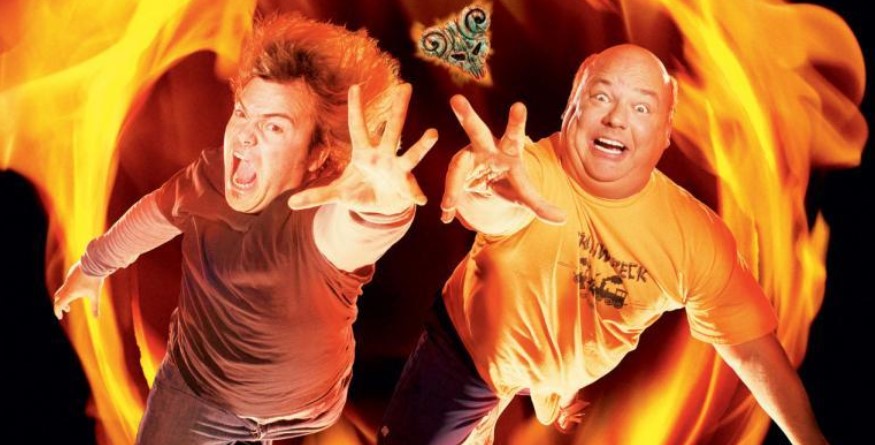 It’s been six years since Tenacious D released their last album Rize of the Fenix.

Now, it looks like Jack Black and Kyle Gass have big news for fans.  Not only is the duo working on another album, but get this- the duo has a Tenacious D in The Pick of Destiny sequel coming out this October!

This was announced by Jack Black during a performance at the Shaky Knees Festival in Atlanta (via myAJC). Black announced that the sequel was going to be coming out in October, and he also said:

“I don’t know where you’ll be able to see it, but we have decided that it’s happening and it’s coming out.”

Though Pick of Destiny didn’t make that much money in the box office when it came out, the movie has become a cult classic, and almost every song in the soundtrack became a hit. It’s also hard to forget Dave Grohl’s appearance in the movie as the Devil:

What’s interesting is, Jack Black has said last year that the D were working on a rock opera called Post-Apocalypto, and some fans can’t help but think that the album will be the soundtrack for this upcoming movie. Black described the project:

“We’re working on a rock opera… It’s a post-apocalyptic musical comedy, and the idea is that you know, you’ve got Pink Floyd The Wall, and you’ve got Tommy [by] The Who, and those are the only true rock operas in existence.”

…You hear rock opera all the time. There’s only two rock operas. Ours is gonna go right there, somewhere in there, and all of the other ‘supposed rock operas’ can suck it! ‘Cause they suck.”

Tenacious D sequel doesn’t have a release date just yet, but hopefully the film will come out in October. You’d think they’d have at least released a trailer by now.