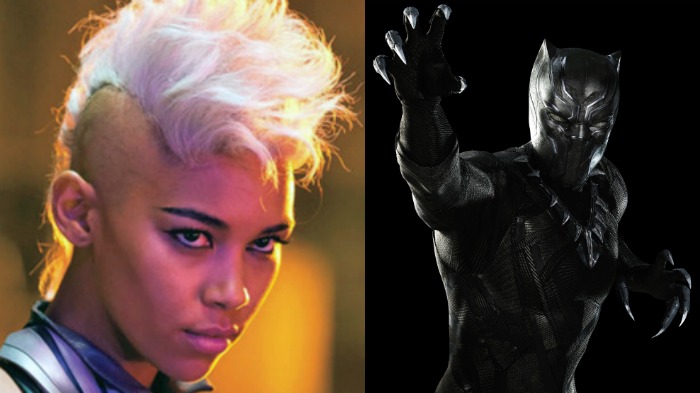 Straight Outta Compton‘s Alexandra Shipp is joining the huge, sprawling X-Men universe in the upcoming X-Men: Apocalypse, as she takes on the role of Storm (who was previously played by Halle Berry). As it turns out, she would love to crossover with the Marvel Cinematic Universe as well.

In an interview on The Lowdown With Diana Madison, Shipp said that she would be interested in starring in a crossover movie with Marvel‘s Black Panther. Storm and T’Challa are frequently a couple in the comics – and were even briefly married. Here’s what the actress had to say:

“I want that movie so bad. I’ve got a pitch, I’m like coming up with a vision board, I want this movie to happen. Honestly it doesn’t have to be me – if Chadwick [Boseman] was like ‘you know what I really want to do this with Hallie’ I’d be like yo, that’s fine at least make the movie.”

Of course, right now such a movie would be off the cards due to Black Panther being at Marvel/Disney while Storm rests with 20th Century Fox. But, hey, who knows what could happen in the future?

Shipp is also up for the idea of a Storm solo movie:

“That would be really cool. Storm is so used to being on her own – she finds these families and these people she really cares for — I wonder what it would be like to see Storm on her own – wouldn’t that be dope if Storm didn’t [have a team]?”

Shipp’s version of a younger, less heroic Storm will arrive in X-Men: Apocalypse. It has been announced that she will be one of the Four Horsemen of Apocalypse (as played by Oscar Isaac), along with Michael Fassbender’s Magneto, Olivia Munn’s Psylocke and Ben Hardy’s Angel. See the movie in cinemas from 27th May in the US and from 18th May everywhere else.