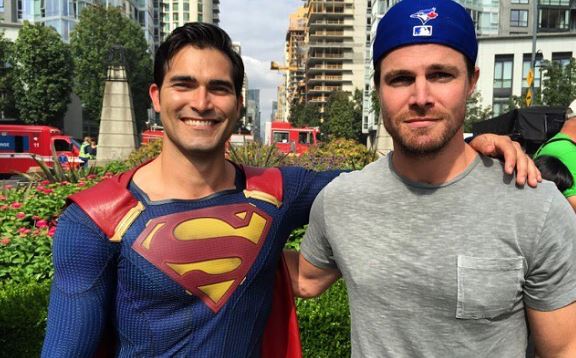 One of the great things about Superman joining Supergirl is that the possibility now exists for the Man of Steel to meet up with the other DC heroes flying/running/time-travelling (delete as applicable) around. After all, they now all take place on the same network. Well, thanks to a new behind-the-scenes photo, we have got our very first taste of this.

Arrow star Stephen Amell recently posted an enticing photo on his Instagram account that sees him posing with Tyler Hoechlin in costume as Superman on the streets of Vancouver, where Supergirl is filmed (as well as the other The CW shows). He teasingly captioned the image with: “You’ll never believe who I ran into today…”

You’ll never believe who I ran into today…

We know what you’re thinking – does this mean that Arrow is turning up on Supergirl to team up with the Kryptonian heroes? Well, sadly, it probably doesn’t. As we said above, Arrow is also filmed in Vancouver so it makes perfect sense for Amell to go to the shoot just to meet Hoechlin and see how they are getting on. Besides that, Amell probably wouldn’t be as thoughtless as to spoil the surprise crossover on Instagram. Still, we can hope that the Emerald Archer and the Man of Tomorrow will come face to face at some point next season.

Supergirl‘s second season flies onto The CW on Monday 10th October. As well as Hoechlin, new additions to the show include Floriana Lima as Maggie Sawyer and Chris Wood as whoever it was in that Kryptonian pod. Season 1 regular Calista Flockhart will take a back seat as a recurring presence.

Arrow, meanwhile, shoots back to TV for its fifth season on Wednesday 5th October.