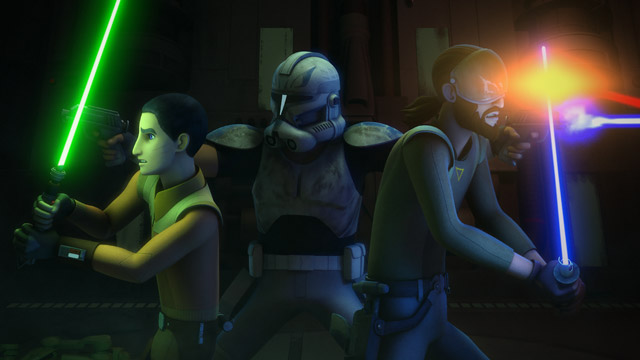 I’ll make this short and simple, I loved The Last Battle. I’m a big fan of The Clone Wars, and this episode was a love letter to that series. I know it’s really old by now, but I am thoroughly impressed with this show. This season in particular has done an outstanding job of highlighting everything that’s great about Star Wars. Using the expansive lore to perfection, and building each week. It’s gotten to the point where I get excited every week, and it hasn’t disappointed me yet.

The Last Battle begins with the Ghost crew, searching for supplies in an abandoned outpost from the Clone Wars. Surprise, surprise, it isn’t as abandoned as it seems and Rex, Kanan, Ezra are captured by a rogue Separatist general. When Order 66 was given, all Battle Droid factories were ordered to shut down, except this one. The Super Tactical Droid general suspected Order 66 was a plot to defeat the Separatists and didn’t do as the others did. In order for the crew to escape, the Droid general challenges our team and Rex to a little war game, the victor ending the Clone Wars once and for all.

This episode really made me realize how much I’ve missed Rex in the season so far. He was one of my favorite characters from The Clone Wars and I loved his arc in this episode. This is obviously an incredibly personal mission for him and brought back a lot of memories for him. We dive a little deeper into his psyche and there are moments where he clearly hasn’t recovered from the war. Calling out for his commanding officer, Commander Cody when he regains consciousness. They’ve never really discussed the effect the war had on the clones now that it’s over. This episode provides some really good closure for Rex, and it’s in line with what we’ve come to expect.

Like I said earlier, this was an incredible love letter to The Clone Wars. They took a lot of parts that made that series great and mixed it with what makes Rebels work as well. The self deprecating humor alone left a smile on my face. The battle droids are notoriously useless and I love them making fun of themselves. One battle droid noting “we’ve never caught anyone” when they capture Rex and the others. It’s fun to see the writers taking shots at themselves and acknowledging the shortcomings of the prequels.

While I loved the episode and most of the events as a whole, the reasoning behind the so called “last battle” didn’t make a lot of sense. This is a super advanced droid and the reason you want to fight is to see how the war could have ended. I’m sorry, but no, that’s just not a good reason. You have an entire battalion of droids and you’re putting them against two half Jedi and an old soldier. That’s not a glorious last battle.

All that being said, what happened after that was the most fun I’ve had all season. The war games itself were great to see. I don’t know what it is about cutting through battle droids that’s so satisfying, but it was great to see again. Watching Rex in battle with two Jedi just felt right and my heart legitimately sank when we was hit a few times. I think what really impressed me the most though was the coming together at the end. Ezra being able to find some common ground between the two former enemies was surprising. When he broke it down it made a lot of sense for them to come together to fight the Empire. The clones or the droids never won the war, the Empire did. That was a really cool moment and one I had never really thought of it before.

Like the prequels, I acknowledge that it has some shortcomings. But I’m willing to accept them because in the end, it’s still fun, and it’s still Star Wars. The Last Battle does a great job of combining the best of The Clone Wars and Rebels into a great and satisfying episode. The episode ending with a Clone Wars inspired Rebels logo and and music was a great touch. Overall, I had a wonderful time with this episode.

Star Wars Rebels airs on Saturdays at 8:30 on Disney XD