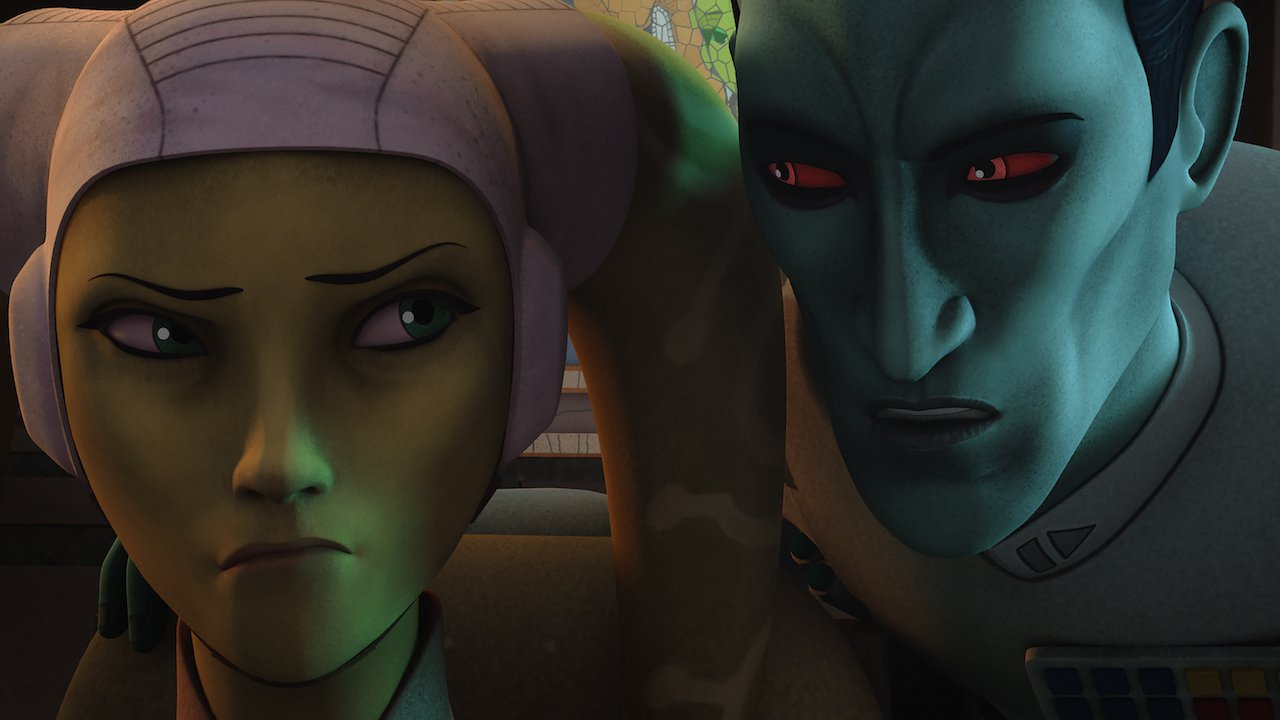 Hera’s Heroes is everything that’s great about Star Wars canon. It draws from the movies, the books, the old Expanded Universe, all of it. There’s so much world building and the show continues to take a more in-depth look into each character. It’s so exciting to see because Rebels is finally hitting its stride this season.

The episode picks up on Ryloth, where Hera’s father, Cham Syndulla is in trouble. Luckily the Ghost Crew isn’t far behind and Hera saves her dad almost immediately. Cham is a well known freedom fighter and rebel who has been fighting the Empire for years. The Empire has taken over Cham and Hera’s home and Cham wasn’t able to save a family heirloom that is dear to Hera. Wanting to get it back, Hera, with the help of the entire crew, and her father, infiltrate her home to save the heirloom. In typical Rebels fashion something goes wrong and that something is Thrawn.

In my last two reviews of the season, I complained a lot about the lack of Thrawn, well that complaint is gone. Thrawn is here, and dear lord is he fully realized. I’ll admit, I never read Heir to The Empire, or any other Thrawn story. From what I’ve read about him this version is 100% true to that iteration of the character. He believes to defeat the rebels, he has to know them and obviously he is learning pretty fast. He looks at all aspects of the rebels lives. Where they come from, their culture, their music, their art, all of it. He is meticulous and an incredible villain. The moment when he went berserk on a fellow Imperial, my mouth was wide open and all I could muster was a single “damn”. I won’t complain about a lack of Thrawn for a while, I promise.

Enough about Thrawn, let’s talk about the heroes. Similar to how the last episode focused on Sabine, this was Hera’s story, and I loved it. An incredibly personal story that dealt with her father and her home. Sneaking around her home was surprisingly suspenseful and there was some real growth from her. She is so similar to her father and it’s so endearing.She is truly a hero,and once again, I love it.

Speaking of her father, Cham is 100% the character that we’ve seen before. I was a really big fan of Lords of the Sith by Paul S Kemp, and his take on Cham. When he appeared last season, it just didn’t feel true to who he was. He was cocky, abrasive and duplicitous and that’s not who he is. The revolutionary is everything right with the Rebellion. Selfless, loving, heroic, and incredibly principled. Once again it pulls from canon stories and for canon junkies, like myself, it is great to see.

Finally the I absolutely love the dynamic between the Ghost crew. They clearly care a great deal about each other and are willing to sacrifice themselves. To dive into a mission just for Hera is incredibly sweet and works very well in the universe. The plan to bust Hera out was also really cool and fun to see. To blow up your own home to escape the Empire is obviously very emotional, but it didn’t feel heavy. Even when their backs were to the wall they were able to escape, that just feels so Star Wars-y. It’s becoming clearer, and clearer, that Thrawn is toying with the Rebels and has a greater plan. He had the chance to destroy them, but instead he “let them have this victory”.God I love Thrawn.

Season Three of Star Wars Rebels continues to impress and Hera’s Heroes is no different. Grand Admiral Thrawn was finally given the screen time he deserves and leaves me wanting more. With the Ghost crew continuing to grow, and the focus on Hera and Cham, Hera’s Heroes is the best episode of the season so far.