The reputation of the Star Wars prequels is as tattered and irreparable as the body of Anakin Skywalker as he clings onto the CGI volcanic rock of Mustafa. But more on that later. Whilst most, bar the younglings, seem to take pleasure in justifiably bashing the movies, we’re going to take the Jedi approach, and look for the good within. There’s no hope that these films will ever get their own Anakin style redemptive Endor ghost, but there are definitely some elements in The Phantom Menace, Attack of the Clones, and Revenge of the Sith, that deserve retrospective evaluation.

The main problem with The Phantom Menace has always been its pace. Back on opening night in July 1999, adrenalin would have carried most people though the taxations and trade federation nonsense, and Jar Jar Binks was an oddity, rather than an irritant. Even the spectacle of the Pod Race seemed to wear off at the end of the first lap, usually at the moment you realised there were another two to go. 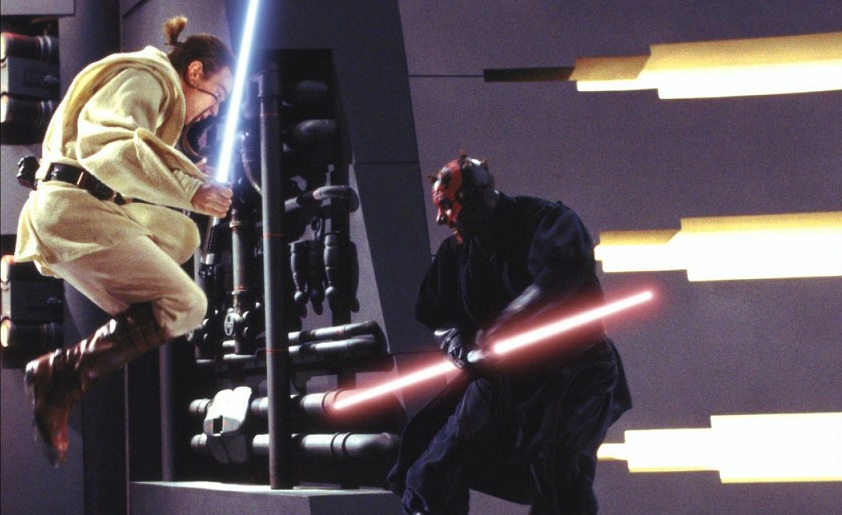 Frustration with the lack of momentum, plus the growing concern that the most indelible creation from the months of marketing hype, Darth Maul, had been sidelined for the majority of the film, were about to be alleviated by not one intimidating hum of an igniting lightsabre blade, but two, as the make-up caked Ray Park prepped his double-ender for battle. Ladies and Gentlemen of the jury, we present to you The Dual of Fates.

Orchestrated by arguably the best John Williams signature theme since the original trilogy, it’s an action sequence that plays out like a choreographed dance sequence. We get interval close-ups of the main players, moments of quiet that build towards a frantic crescendo, and a Jedi death which acts as dramatic punctuation. A complete antithesis of the movie wrapped around it, The Dual of Fates is economical, punchy, and one of the few scenes that justified the decades long hype.

The gladiatorial smackdown from Attack of the Clones was pure George Lucas. A filmmaker who loved the matinee movies from his childhood, ones which had helped shape Indiana Jones and the Star Wars aerial dog fights; this was his chance to do intergalactic Ben Hur. 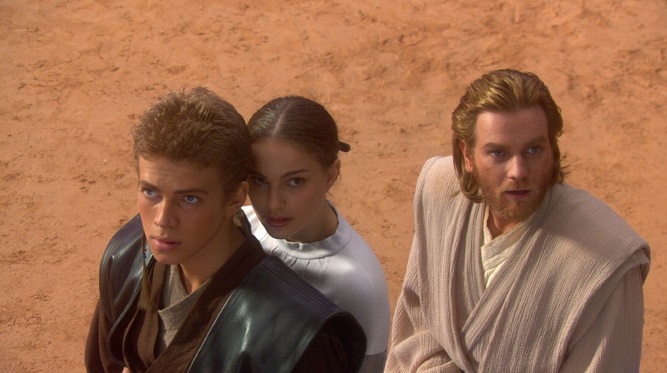 Lucas tried to match the majesty of lines such as “I’ve been dying a little bit each day since you came back into my life” with epic action, and as with most of his prequel work, only one element was truly successful.

It’s a little tedious to complain about a dependence on CG, so let’s just say that the menagerie of beasties was pretty impressive, even if the actor’s eye lines weren’t. A roll-call of Harryhausen style monsters for each of our captors to tackle, even giving Natalie Portman something to do other than struggle with dialogue or fall over badly. Here she gets to fly kick a giant rat faced thingy before executing a perfect landing onto the back of Anakin’s horned steed.

Not a single moment, but a series of them from an actor who clearly still cherishes his time as Obi-Wan, even if time hasn’t been kind to the films.

Throughout the prequels he seemed to wrestle with the seemingly one-take nature of the shooting process, growing into the beard and becoming more comfortable with the robe by the time we get to the raw delivery of “you were the chosen one”. What comes across with McGregor’s channelling of Sir Alec Guinness is a playful sense of fun, like the big kid doing what we all wanted to do when we fell in love with the originals, and it translates to the audience in a way that so little of the rest of the prequels do.

His solo mission to Kamino in Attack of the Clones is like a more interesting mini-movie in itself, and the recent rumblings that Obi-Wan might get an extended universe outing, gives us a new hope that McGregor will get another shot at a character he was never really allowed to make his own.

Unquestionably the best of the prequels, Revenge of the Sith begins with a mid-air battle directed with the intricacies of the inner workings of a clock. There are so many moving parts, and the lens weaves in 360 angles that would make Alfonso Cuaron sit up and take note. The opening one-take shot which begins after the iconic text scrawl, and features Obi-Wan and Anakin’s vessels navigating their way through debris, explosions, and a sea of spaceships, is undeniably stunning.

The best thing is that this is just the pre-cursor to the introduction to 40-a-day bad guy, General Grievous, some hitherto unseen Jedi superpowers, and hints of genuine chemistry between McGregor and Christensen. And that’s all before Anakin has lobbed off Dooku’s head.

It was the reason the prequels existed, to see how one of the greatest bad guys in cinema history was diagnosed with acute breathing difficulties. Forget the oft-ridiculed Frankenstein’s monster re-birth, the real power in Vader’s origin story comes in the lava spewing showdown between Anakin and Obi-Wan on Mustafa. 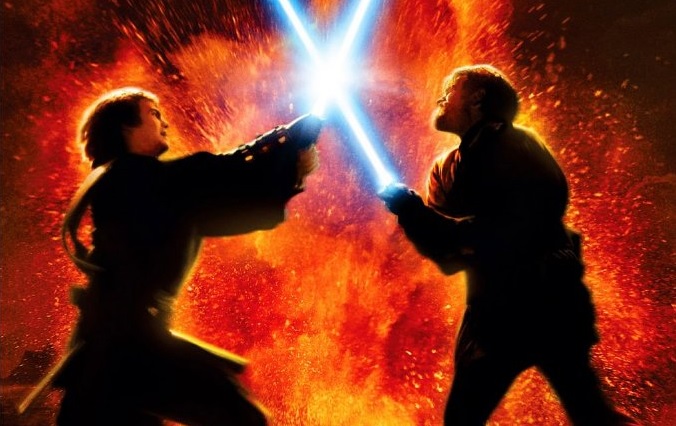 Much of why this lightsabre duel and wannabe Shakespearean showdown works is in McGregor’s delivery, and John Williams’ operatic score. Lines such as “I have failed you” and “you were my brother, Anakin” hit home in a way that you probably didn’t expect considering the rather cardboard way the majority of dialogue had been delivered thus far, but there’s no denying that by the time Anakin went up in flames like a campfire sausage, that moment at least, had delivered upon the promise.

So whilst you all revel in the palpable excitement of the trailer for Star Wars Episode VIII: The Last Jedi, once you’ve added to the YouTube viewcount a few thousand times, try searching for a few of these moments, because although the force wasn’t always strong in the prequels, it’s still in them if you look hard enough.