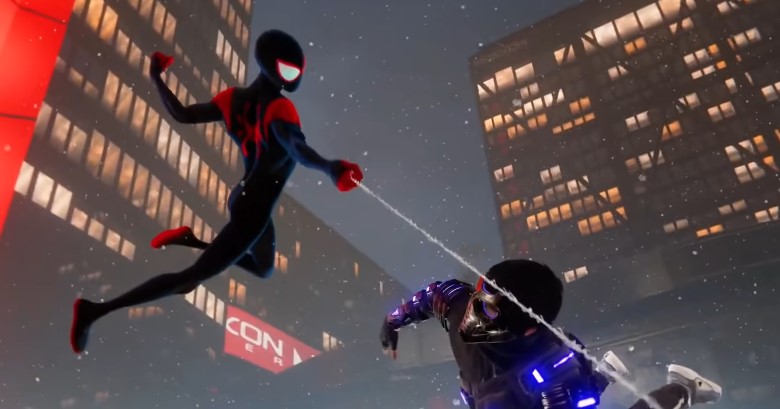 Miles Morales may be taking center stage in the next Spider-Man title from Insomniac Games, but Miles was very much the star first in the animated Spider-Man: Into the Spider-Verse. As expected, the game is going to give us a skin based on the Spider-Verse Miles, but it has some  really unique features that fans were probably not expecting.

Check out the official reveal:

As you can see, they really embraced the aesthetic of Miles from the animated movie, and they even tweaked the body proportions so that it’s more accurate to the film. What’s more, when Miles is fighting in this skin, you can see comic book sound effects come out when he punches or kicks villains.

Probably my favorite feature is that this skin has its own unique frame rate that’s very much like the one from the animated movie, so when you see it move in the game, it feels very much like you’re playing Miles in the film. It’s a really good detail that I never thought they would include.

Seeing that Peter got his own set of unique skins with the first game, we should have a pretty wide roster for Miles. With the Into the Spider-Verse skin though, it just adds a whole new level of expectations moving forward. Now new skins aren’t enough, they have to come with special features and animation. Hopefully Insomniac has more up their sleeves, but honestly I’m pretty pleased with how this one came out. It would be perfect if you could play the whole game with an Into the Spider-Verse filter, but maybe that’s asking for too much.

Spider-Man: Miles Morales launches alongside the PS5 on Nov. 12.