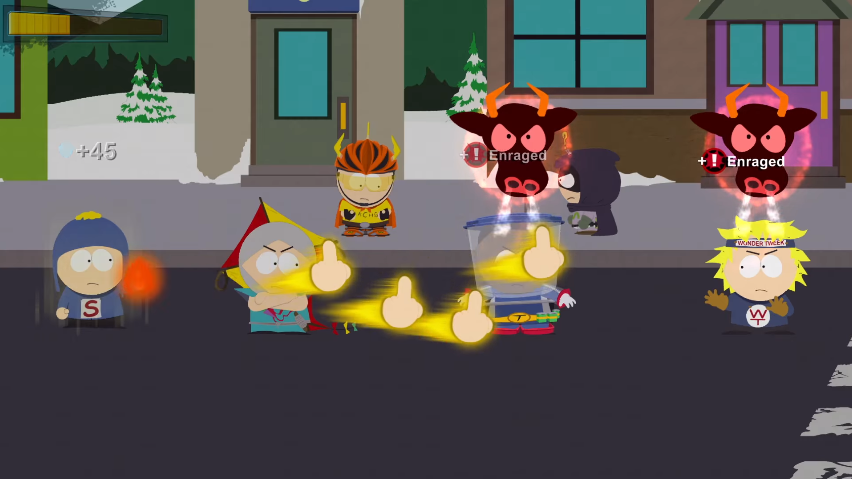 One of the darkhorse video game hits of 2014 was South Park: The Stick of Truth which, thanks to the direct involvement from franchise creators Trey Parker and Matt Stone, could be considered one of the best TV-to-Game adaptations of all time. The first game, co-developed by Obsidian Entertainment, satirised epic fantasies like Game of Thrones, Lord of the Rings and more. In South Park: The Fractured But Whole (tee-hee), Parker and Stone, in collaboration with development studio Ubisoft San Francisco, have set their sights squarely on superhero cinematic universes.

The plot involves a continuation of the TV show’s “Coon and Friends” storyline and a rift has formed which splits up the kids of South Park in a “Civil War.” We got a taste of the gameplay in South Park: The Fractured But Whole at Gamescom this week. Dspite the superhero trappings and set-dressing, it seems the team-focused, turn-based combat from the first game is very much intact. For example, instead of choosing a class consisting of a Fighter, Mage, Thief and Jew, this game commits to the superhero theme by having you choose between Brutalist (like the Hulk or Captain America), Blaster (Cyclops) or a Speedster (the Flash or Quicksilver).

This looks like a safe bet if you were a fan of the first game, as it appears to be more of the same in both the gameplay and the humour department. But we’ll know for sure when South Park: The Fractured But Whole releases on Xbox One, PS4 and PC on December 6.

“This highly anticipated sequel features more than twice the amount of content than South Park: The Stick of Truth. Created, written, voiced, and directed by Trey Parker and Matt Stone, South Park: The Fractured But Whole is authentic, interactive South Park at its finest – hilarious, outrageous, and a whole lot of fun. Everything is bigger, longer, and goes deeper than before. Come on down to South Park and have yourself a time.”