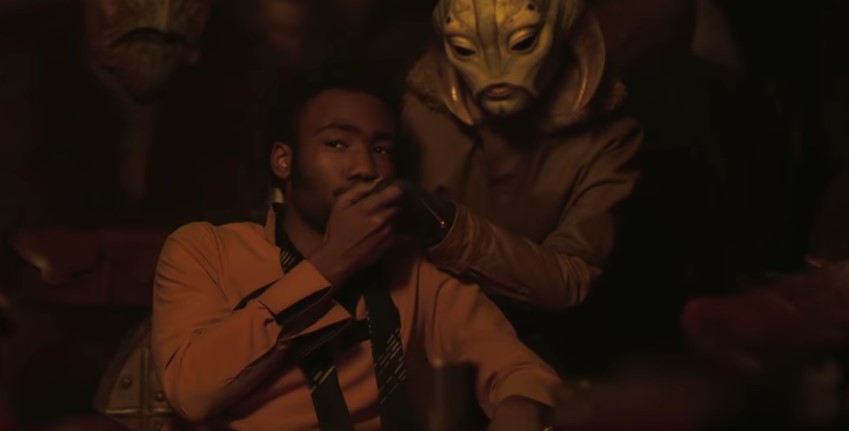 Fans probably remember when we were first introduced to Billy Dee Williams’ Lando Calrissian in Empire Strikes Back.  We saw immediately saw Lando set his eyes on Princess Leia when she arrived in Cloud City with Han Solo. With us finding out more about Lando in Solo: A Star Wars Story, co-writer Jon Kasdan talks a bit about Lando’s sexuality.

Talking to The Huffington Post, Kasdan reveals that Lando is actually pansexual (i.e., he has fluid attraction to anyone, regardless of gender or species). Kasdan explains:

“I would say yes… There’s a fluidity to Donald [Glover] and Billy Dee’s [portrayal of Lando’s] sexuality.”

In the one of the clips, we actually see Lando kiss the hand of an alien behind him. Could this be a clue that Lando really is a horn dog? Kasdan continues to talk about sexuality in the Star Wars galaxy:

“I mean, I would’ve loved to have gotten a more explicitly LGBT character into this movie… I think it’s time, certainly, for that, and I love the fluidity ― sort of the spectrum of sexuality that Donald appeals to and that droids are a part of.”

Remember the scene where L3 tells Lando to stop flirting? Maybe Lando was actually hitting on Han. Then again, I don’t think anything too explicit will make its way into the movie. Plus, it’s funnier to watch the two as friendly rivals.

Lando has come out to be one of the most anticipated characters for Solo: A Star Wars Story.

We can’t wait to meet him when the film hits theaters May 25.