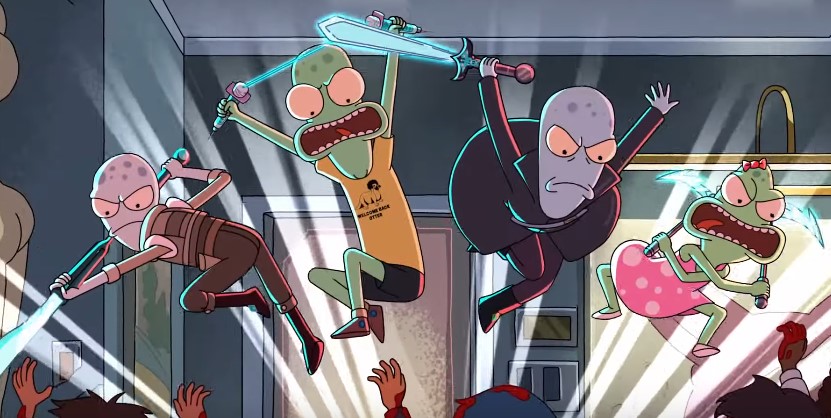 Rick and Morty co-creator Justin Roiland sure is keeping himself busy. Besides Rick and Morty and games like Trover Saves the Universe, he also has this different show for Hulu called Solar Opposites. We just got our first trailer, and it promises a lot more sci-fi hijinks.

Solar Opposites centers around a team of four aliens who escape their exploding home world only to crash land into a move-in ready home in suburban America. They are evenly split on whether Earth is awful or awesome. Korvo (Justin Roiland) and Yumyulack (Sean Giambroni) only see the pollution, crass consumerism, and human frailty while Terry (Thomas Middleditch) and Jesse (Mary Mack) love humans and all their TV, junk food and fun stuff. Their mission: protect the Pupa, a living super computer that will one day evolve into its true form, consume them and terraform the Earth.

If anything, the show feels a lot like Rick and Morty as well, what with the family trying to get by on Earth while running into some sci-fi-related problems. I guess Roiland is kind of working to his strengths when it comes to this show. I mean, if Seth MacFarlane can make Family Guy, American Dad, and The Cleveland Show, then I’m sure Roiland can work on something like Solar Opposites.

It’s going to be interesting to see how different Roiland’s work is without Harmon, seeing that Harmon usually likes to delve deep into his work. Then again, I’m all up for some light, raunchy humor.

Catch Solar Opposits when it comes to Hulu on May 8.