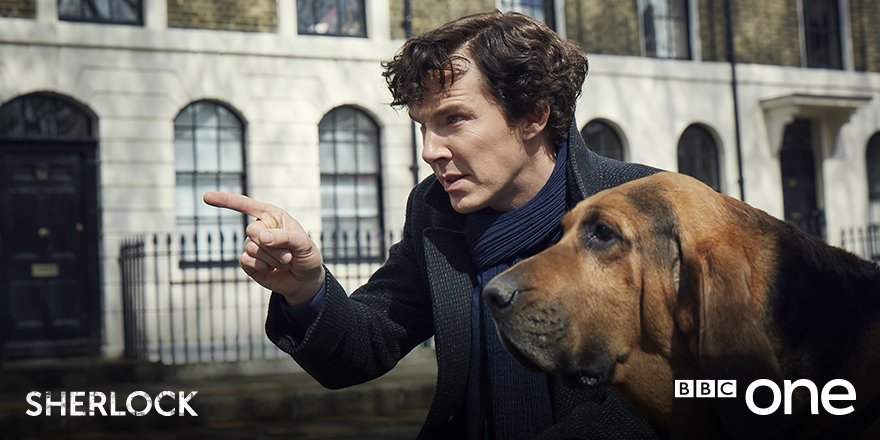 Benedict Cumberbatch, British actor and star of the hit BBC show Sherlock, has a new partner in crime (fighting) in the very first image of the show’s fourth season. The first-look image, revealed on the BBC’s Twitter account, shows Sherlock accompanied by a dog, specifically of the Bloodhound breed.

In the second book of author Sir Arthur Conan Doyle’s Sherlock Homes stories, The Sign of Four, Sherlock has a dog named Toby that he uses to track scents. Could this be that very dog and an image taken from an episode adapting that particular story? The character Molly Hooper from the show has a cat named Toby which could be a nod to the partnering hound. However, this image looks to highlight the addition of Toby the dog.

Speaking of Toby, it was announced back in May, when filming began on the show’s fourth season, that actor Toby Jones would be joining the cast. His character will make an appearance in episode 2 of the season. However, who he is playing remains a mystery. With that said, co-creator Mark Gatiss hinted at the fact he may be playing one of “Doyle’s finest villains,” which opens up an array of possibilities.

At the end of the third season, it was revealed that Sherlock’s nemesis Moriarty was seemingly still alive. Could Jones’ character be connected to Moriarty in some capacity. Or is he indeed the main antagonist, with Moriarty’s revival all but a ruse? At this stage, not much else is known about the fourth season of the show, beyond a few spoiler-y shots from filming, with fans having to speculate over what direction it will take. Only time will tell where it goes.

Sherlock season four is pencilled in to air on New Year’s 2017.

Image via the BBC.