5. The Seven Deadly Enemies of Man 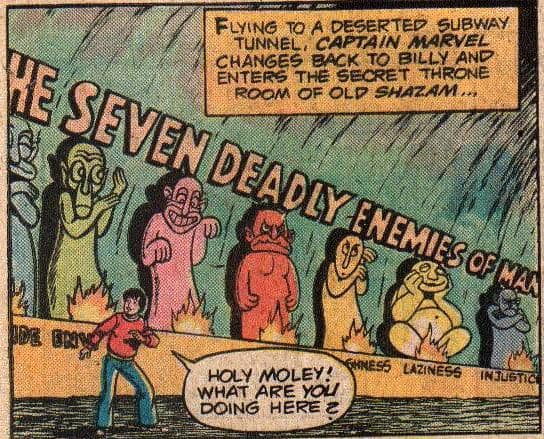 AKA the Seven Deadly Sins: Pride, Envy, Greed, Anger, Sloth, Gluttony, and Lust. In classic Shazam comics, these seven sins were embodied by seven demons which the wizard Shazam (who gives Billy his powers) keeps imprisoned in the Rock of Eternity.

Naturally, every now and then, they get out. And being the heir to Shazam, it will often fall to Billy (provided he’s available) to round them up.

Hard to think of a bigger opponent for the young hero than embodiment of evil itself. Certainly not Mr. Banjo, who we again insist was a real villain, but we’re not counting on seeing him brought to life on the big screen. Nor Captain Marvel’s brief opponent from the 40s, Spiderman. Yes, the pantheon of Shazam villains includes a character named Spiderman, who hasn’t been seen since the 1960s for what we feel are obvious reasons.