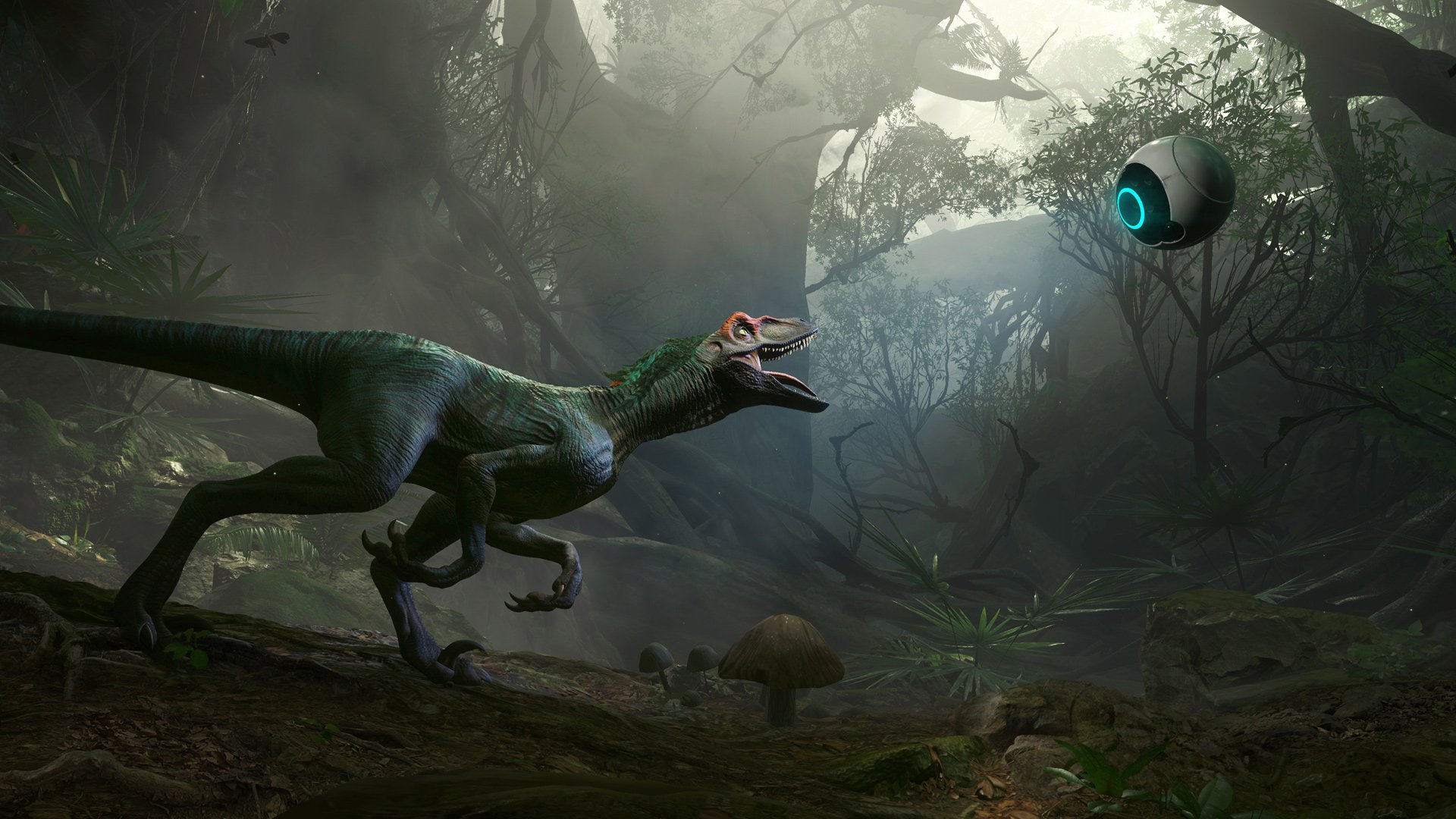 Velociraptors are terrifying. Though, you already knew that if you ever watched the original Jurassic Park. However, Robinson: the Journey (Robinson) taught me I had no idea how nervous avoiding virtual velociraptors would make me until I finally had the opportunity (thanks, Crytek). But, aside from probably having added to my chances of hypertension, Robinson also taught me that VR is a medium that can produce games whose potential is so breathtaking that when it misses the mark, it can be dreadfully disappointing.

The good, the bad and the beautiful

Robinson: The Journey isn’t a bad game by any means. In fact, there are aspects of the game that are nothing short of fulfilling any childhood fantasies you might have had about escaping into the nearby woods—or back yard—and living on your own, with just your wits and ingenuity to guide you. (Or, maybe I was just a weird kid). More accurately, the game is very loosely based on the story of Robinson Crusoe. You play as Robin, a young boy whose colony ship crash-landed on a planet called Tyson III. Robin has already been there over a year and is eager to find anyone else who might have survived the crash—especially his parents. He is accompanied by a hovering robot named HIGS, and a baby T-Rex. If you never thought about wanting a baby T-Rex as a companion before, it will become your sole desire after playing this game. (Again, maybe that’s just me).

The game’s beauty, though I am not the first to comment on it, is almost worth the purchase on its own. It is difficult to describe unless you’ve tried it for yourself. Everything from the plants to the boiling tar pits, to the distant sections of the crashed space ship scattered along the hills is engrossing and picturesque. I would have been quite happy wandering through jungles and distant mountains and zip-lining down vines just hanging out with the dinosaurs and other wildlife—except the afore-mentioned velociraptors. Just surviving, keeping up my camp, and exploring would have been enough for me had the game been centered solely on that aspect. But, this game has a tale to tell, and it is your mission to put the pieces together.

The game’s story, while a bit thin, does have it’s moments. Much of it is conveyed through audio files and images you’ll find in other, out of service, HIGS units. You learn a bit more about what happened to the colony ship and her inhabitants. A lot of the story is predictable. However, it does have its moments. The climax, in particular, was one of the most moving scenes to me. I suppose because it hits on the basic human need for companionship and hope, even when we are lost and uncertain of what the future holds. It is also quite visually impressive.

But, there always seems to be something that distracts you from this sense of awe and wonder. For me, this usually came in the form of somewhat glitchy climbing mechanics, getting lost with no clear way to go, or tagging, tagging, oh dear God, I feel the need to tag everything I see for the sake of science. I’m a gamer, Jim (I mean, Crytek), not a biologist.

Getting a grip on the situation

The climbing is the only complaint I have that I am a bit torn over. I did enjoy it, most of the time. It sort of made me feel like Tarzan, or like I was actually in shape and could climb things. However, I don’t understand why there was not an option to use the motion controllers. It seems like this would create a far more fluid and natural feeling mechanic. Overall, guiding the hands with your nose wasn’t too bad, but I could see how this mechanic could cause some nausea or motion sickness in some gamers. Overall, though, it turns out I actually enjoy climbing in VR, despite a very real fear of heights. I hope this mechanic can be more smoothly integrated into future titles, hopefully with the addition of motion controller support.

The other issue is, while climbing the game sometimes doesn’t recognize the hand is close enough to the ledge—or plant growth—to grab hold. In sequences where your handhold folds down after a few seconds, this can cause you to plummet right back to the bottom, sometimes resulting in an unnecessary death. Of course, no game is perfect, but add this to the lack of direction and it can become frustrating very quickly.

Finding a sense of direction

Speaking of a lack of direction, I grew up in a time when it was normal for a game to give the player quite a bit of leeway when it came to figuring out where to go next. I actually look back on those old Final Fantasy games and the sometimes hours worth of wandering in a very nostalgic light. However, when your paths are winding and somewhat convoluted, and when you have to climb quite a bit—again, fun, but tedious when the controls don’t work properly—I sometimes started to wish I had a bit more direction just to save me time. I began to long for my base camp.

The game does do a great job with player interaction. If you should be able to pick it up, you usually can. You can even play a game of hoops back at the base camp if you just want to chill for a bit and kick back with your baby dino buddy. However, this interaction also involves tagging every creature you see so you can log it. For some people, I imagine spending hours finding every creature in the game and tagging it for science would be loads of fun. For me, it made me wish I was playing No Man’s Sky again because at least in that game, all you had to do was scan the creature by aiming and holding down a button. Sure, getting it to sit still long enough was a challenge, but the mechanic itself was easy.

In Robinson, you have to carefully tag a series of green dots that appear on the creature when you scan it. Hitting one of the red dots causes you to have to start all over. As a minigame, this isn’t too bad of an idea. But, having to do this every time caused me to lose interest. Thankfully, you don’t have to complete this element of the game. It is up to you and your patience level.

The future looks good, but maybe wait a while

Overall, Robinson: The Journey is a beautiful game that successfully pulls you into the world from the beginning. You want to explore, and a part of you, at least for me, wants to stay there for a while and see everything there is to see. In that way, it is a well-designed game. However, it is hard to overlook the feeling that the game doesn’t quite reach the potential it had. The thin story, save for a few moments, the lack of direction and the sometimes frustrating climbing controls (oh, and the tagging), take away from what could have been. It does, however, speak well of what Crytek can accomplish with VR. As studios are still figuring out the best way to use the VR platform, Crytek certainly seems well on their way. Though, you might wait until Robinson: The Journey drops in price a bit before delving in.

It is a well-designed game. However, it is hard to overlook the feeling that the game doesn’t quite reach the potential it had