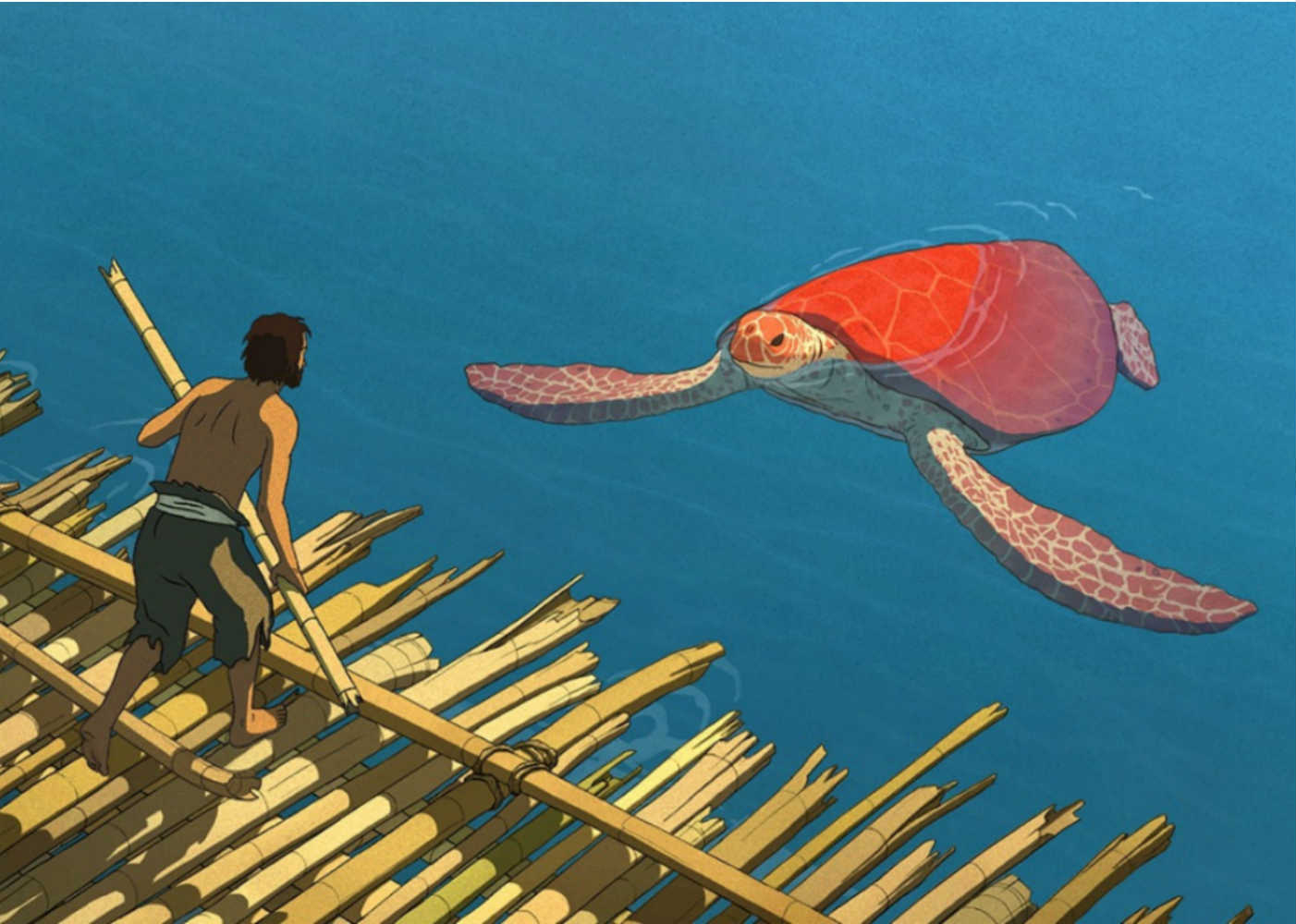 This co-production between the legendary Japanese animation giants Studio Ghibli and Wild Bunch, their international distribution arm, is one of the purest pieces of storytelling in recent times. Co-written and directed by Dutch-British animator, Michael Dudok de Wit, The Red Turtle (La Tortue Rouge) washes over you in a way few films can, with a beautiful tale of humanity, survival, and heartbreak.

Essentially a shipwreck story, we are thrown into the same choppy waters in which we find our nameless protagonist, who is subsequently washed ashore on a deserted island. The geography of his new home is small; there’s a bamboo forest with a freshwater lagoon, a stony cliff-face, and the stretch of beach upon which he begins to assemble his escape vessels.

The problem is, every time he attempts to flee the island towards the endless horizon of the ocean, a mysterious creature appears to be destroying his bamboo boat. When his deep sea nemesis turns out to be a giant red turtle, it triggers a confrontation that alters his very existence, shaping an unexpected path that plays out over the course of his life and the films duration.

Largely dialogue free, The Red Turtle is silent movie extraordinaire. Words aren’t needed when the animation is this resplendent. Using a diverse colour scheme to highlight the changing topography on the island, and flipping it with a saturated filter when the sun goes down, meaning that the night scenes elicit a genuinely cold chill in the viewer, is just one example of the subtle techniques that are symptomatic of the film as a whole. It’s so wonderfully simple and understated.

The drama also plays out on a small scale, despite the life-or-death ramifications for the survivor, and this makes him an instantly empathic figure; the skinning of a pungent seal carcass, the shelling of an island fruit, his attempts to escort some newly hatched turtles into the surf. There’s also a sequence in which he falls into an inescapable water canyon, from which the only way out is a narrow underwater crevice. He panics, he dithers, and he makes multiple forlorn attempts to scale the vertical walls, like a spider in the bathtub. His actions are fallibly human, and relatable, which entwines his fate with the emotions of the audience, ensuring The Red Turtle is a moving  journey for both.

To divulge too much about the events that unfold on the island would seriously affect your own enjoyment of having this story take over your senses like a warm sea breeze, but suffice to say, de Wit’s screenplay takes you in a direction that walks a wonderful line between fantasy and reality, a line blurred by thoughts of delusions brought on by solitude, or that it could all be an afterlife narrative. Such a simple story works on so many interpretive levels, because it might also just be about some playful sand crabs and a lonely giant turtle. In that regards, The Red Turtle is perfect for everyone.

In a similar vein to Tomm Moore’s stunning Song of the Sea, this is absolutely gorgeous, and capable of leaving you with a sense of haunting wonder, thanks to its genteel tale of hope and grief. The Red Turtle is a silent movie that has so much to shout about.