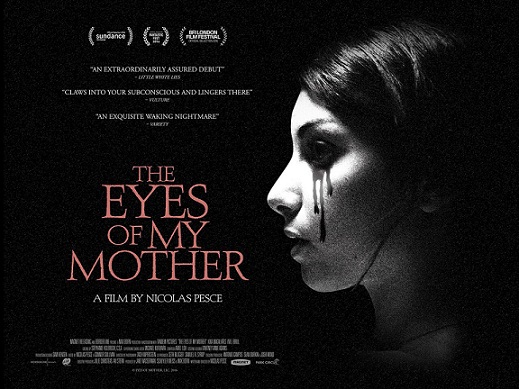 Where to begin with Nicolas Pesce’s debut feature? The Eyes of My Mother is situated at the extreme end of strange, but not in the shock tactic fashion that you might expect from a film that contains ocular surgery, puppet chained prisoners, and sequences which bring new meaning to remembering the dead. No, this is more art-house than slaughterhouse. The Texas Chainsaw Massacre, but without the chainsaws, screaming, or cannibalism. In fact, this could be set in a woodland clearing situated across the way from Robert Eggers The Witch, or just around the corner from Tobe Hooper’s aforementioned classic.

Told in three chapters, each focuses on Francesca (Kika Magalhaes) at different stages of her odd life. An existence thrown into turmoil when a randomly horrific event takes her surgeon mother (Diana Agostina) from her. The two shared a strange connection, one in which Francesca was taught to understand death, and in which the two of them are shown bonding over the dissection of a cow’s head. Gilmore Girls this aint.

Never really moving from their secluded farmhouse, Francesca suffers from crippling loneliness, something heightened by her seemingly unresponsive father, and unable to interact with others in a way that would facilitate a normal family, goes about constructed her own macabre little existence.

There’s so much to take from The Eyes of My Mother’s brief 77 minute run time, a lot of it burdened by a creeping unease, images scorched to stay with you as though you’ve just stared into a sun that is wholly absent from Pesce’s monochrome filter.

The look of the film is as clinical as the subject matter, with some early establishing shots rigidly framed, as if squared off by some celluloid saw. The opening sequence, which sets a tone of unease that the film never quite shakes, is beautifully creepy, evoking Texas Chainsaw once again, it features a hunched girl staggering down the road as we ride passenger with a truck driver approaching the scene. That over-the-shoulder camera technique is something Pesce uses a lot early on, as if inviting the audience to follow closely, but not too close, because you might not like what you see.

What is undeniably worth looking at is Kika Magalhaes, who delivers a transformative performance from sympathy to sickening. It’s a character study of the victim becoming the monster, and this mannered breakout performance is one of half focused looks, shifting moods, and a waif-like danger. The power of the performance comes from her shift in personality, one that makes the audience uncomfortable; this girl, with who we’re meant to feel pity, has evolved into something so bleak that the story gives us nothing to cling onto as we look into this backwater abyss. That’s what’s so terrifying.

The Eyes of My Mother won’t be for everyone. It’s a hard film to embrace or even recommend, but as a bleak slice of indelible horror, with an expressive breakout central performance, you could do worse than take a walk down this dark path.