Skip to content
Home » ‘Powerless’ Not Quite Powerful Enough 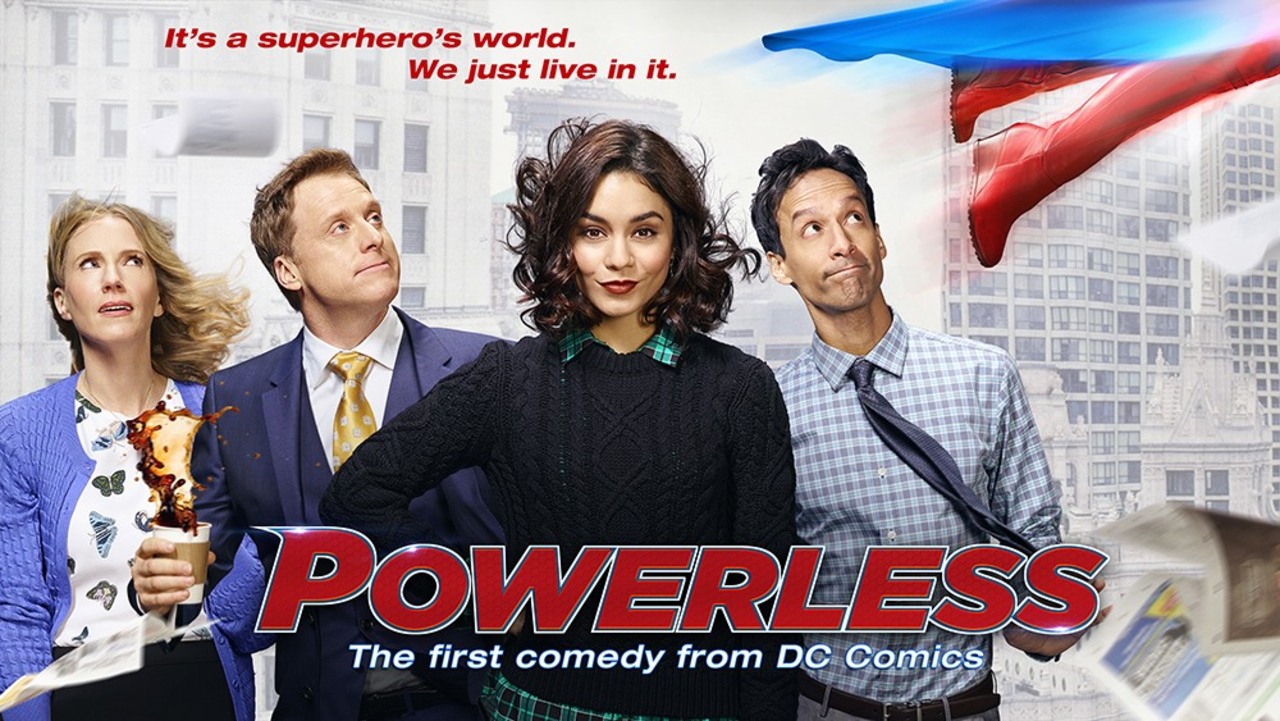 I watched the first two episodes of DC Comics’ new half-hour comedy Powerless, on NBC, over the weekend. I will admit, I was skeptical since, typically, DC’s live-action adaptations aren’t known for comedy. They’re famous for dark and brooding characters – ahem, Bats – and story lines that don’t tend to make humanity look good. Generally, I’ve gone to Marvel for the fun stuff. So I tuned into Powerless with low expectations, but high excitement.

Emily Locke (portrayed surprisingly well by Disney alum Vanessa Hudgens) stars in Powerless, a show about a woman who grew up in a “flyover state” where superheroes never land. Emily decides to go work for Wayne Security in Charm City, where everyone except her is ho-hum about the superhero/villain events that happen during the morning commute. Before you get all excited at the mention of a Wayne company, no, it’s not that Wayne. Instead, we get Bats’ cousin Van Wayne (played pretty spot-on by Alan Tudyk) who refers to his cousin Bruce Wayne as “cuz-bro” and “B-Dub,” and generally acts like they’re close but it appears that they’re really, really not close. On Emily’s first day, Bruce Wayne shuts the department down, calling it obsolete and Van Wayne quips that “our products are powerless to stop them,” thus giving us our show name.

“It’s just supervillains trying to destroy the earth, and superheroes fighting each other for vaguely defined reasons. Our products are powerless to stop them.” -Van Wayne

Emily manages to get her team to come up with a ‘Big Idea’ that Bruce Wayne loves so the department lives to create another day. This doesn’t please Van Wayne, who is hoping to “fail up” into the Gotham headquarters.

So, how does the show stack up in my mind? Well, I did laugh, a lot. The comedic timing works very well for Hudgens, and Tudyk actually makes Van Wayne… tolerable… with his quips. Van’s secretary Jackie, played by Christina Kirk, delivers some of the best lines of the show, actually. However, the team’s portrayal is rather heavy-handed with the writing, almost like they’re trying to force-feed these characters to us.

The team is a diverse cast, with Danny Pudi as Teddy, the company’s Chief Design Officer, Jennie Pierson as Wendy, the Lead Software Engineer, and Ron Funches as the Head of Engineering and, as Teddy likes to put it, the chief of childlike wonder. Which exactly sums up the problem with this bunch. They come across more like college student interns who got in solely based on their equal opportunity check-boxes. I can only hope that their remarks about their other Big Ideas not getting green-lit due to costs will mean they’ve actually had good ideas versus the ones we’ve seen, so far.

I want to like this series, I want it to succeed. Most of the writing is good, and it’s funny. The cast works well with each other and there is some chemistry between a few of them. I definitely want to see more villain/superhero interaction in the future. I think this series has potential and I am still excited about it.