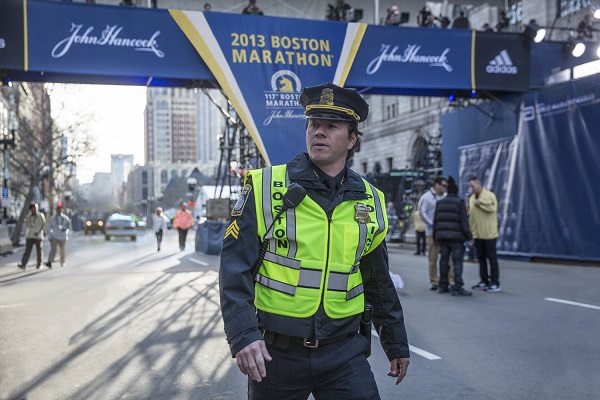 Ever since Patriots Day was announced, there has been a question of whether it’s too soon to watch a film chronicling a disaster as recent as 2013. Both United 93 and World Trade Center waited five years after that fateful day before Hollywood had a go at reconstructing catastrophe. Now Peter Berg’s film has arrived, the point is moot, there’s nothing sensationalised or insensitive about it. In fact, there’s nothing that special about it either. Patriots Day is admirable to the point of being workmanlike.

Our window into proceedings is Sergeant Tommy Saunders (Mark Wahlberg), who’s pulling security detail at The Boston Marathon finish line on the morning of April 15th 2013. Running parallel to this, we’re shown a young couple preparing to head to the same location to cheer on the runners, a Chinese student (Jimmy O. Yang) who has recently purchased a luxury car, the seemingly normal Dunkin Doughnuts routine of Sergeant Jeffrey Pugliese (J.K. Simmons), and chillingly, the preparatory mechanics of terrorists, Tamerlan and Dzhokhar Tsarnaev, as they ready the pressure cooker bombs that would wreak havoc on the streets of Boston.

Peter Berg is a director capable of translating true stories to the big screen in an effective manner. This is his third fact-based thriller starring Mark Wahlberg, following Lone Survivor and Deepwater Horizon, and whilst they’re suffering from diminishing returns, there’s still enough here to make it a recommendation, despite the nagging feeling that the events would be better served by a documentary.

Constructed using a mixture of hand held intimacy, which heightens the claustrophobia during the bombing sequences, and actual CCTV footage depicting the actions of the bombers, used throughout as narrative prompts, this is slick filmmaking 101. Paced to replicate the rolling news fashion in which the ensuing manhunt played out, Berg is acutely aware that he mustn’t glamourise elements of the events, whilst always maintaining a need to entertain.

The action is brief, with time taken to digest the consequences; an officer stands in a deserted street next to the covered body of a young victim. Berg chooses to focus on moments of humanity such as this, when other filmmakers might have opted for flag waving jingoism and an overriding sense of retribution or revenge.

Performances are a mixed bag, but it’s not surprising given the choppy, location hopping nature of having to juggle multiple plot threads. Wahlberg is hardly stretched, beyond putting on a limp that he quickly forgets about, and the trio of Kevin Bacon, John Goodman, and J.K. Simmons all fit their skin perfectly as grizzled police architypes. The biggest crime is in wasting an actress like Michelle Monaghan, asked to do little but worry about her husband in an effort to make us care more about the fate of Wahlberg.

The most interesting aspects of Patriots Day come from the elements you won’t necessarily have been presented with as the story broke. The interrogation of Tamerlan’s wife, the involvement of Dzhokhar’s frat buddies in concealing his bomb making equipment, and the journey taken by Dun Meng for being in the wrong place at the wrong time.

Berg also falls foul to what a lot of dramatic recreations do, and finishes with a series of talking head interviews from the real victims, which have more impact and resonance than anything in the previous two hours, once again reiterating the documentary preference point.

Never anything more than a solid, respectful account of a horrific event. Patriots Day sheds little light on the Boston bombings or its perpetrators, instead acting as a tribute to the courage of those involved in the aftermath.