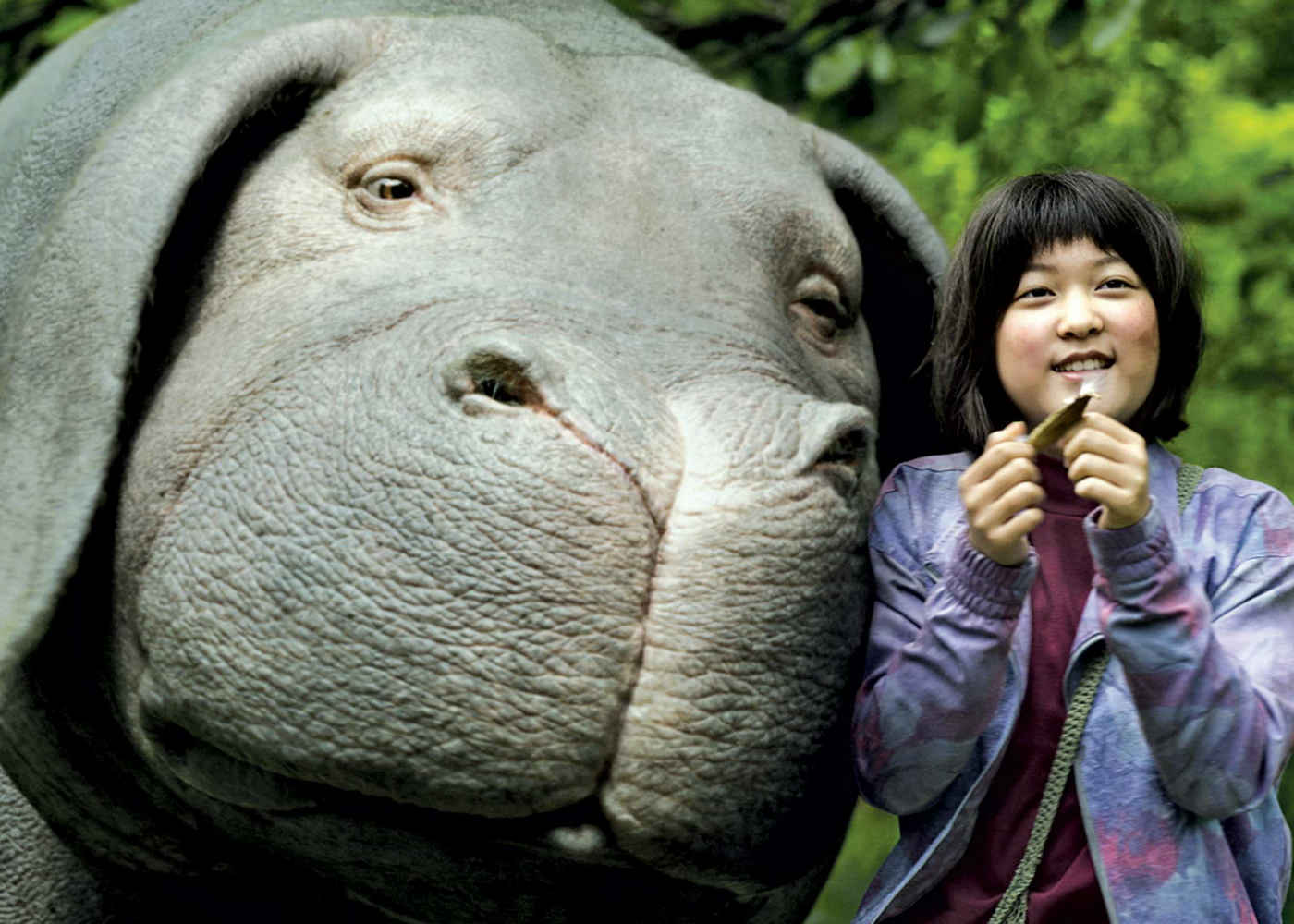 Booed at Cannes for the baggage that surrounds the streaming vs. cinema distribution debate, Bong Joon-Ho’s my pet monster movie arrives with the impact of one of the titular Okja’s huge thudding footsteps. Shorn of that landscape changing baggage, and simply judged as a movie, Okja is nothing more than a sweet little fable, with the kind of ecological subtext that has fuelled the Studio Ghibli canon for years.

With the world’s sustainable food sources running low, a multi-national company sets in motion a decade long plan involving ‘SuperPigs’. Huge manatee looking sows would be sent to destinations around the world, under the façade of a farming competition, before Tilda Swinton’s perma-grinned CEO would recall them in a huge marketing stunt to promote SuperPig sausages to a carnivorous consumer America.

What she doesn’t count on is Marji, a young Korean farm girl who has formed an unbreakable bond with her pig, Okja. They play together, fish together, sleep together, and she even has a way of making her shoot poop from her extra-large derriere. That’s friendship.

So when Jake Gyllenhaal’s eccentric Steve-Irwin alike arrives at their mountaintop home to ship Okja back to America to meet her fate, it triggers an incredible journey, as Marji attempts to bring her best friend home.

Cinema is crying out for originality, and whilst there’s nothing that new about a youngster befriending a creature that is subsequently threatened to be taken from them (hello E.T., Free Willy, Pete’s Dragon), the way in which Bong pieces together this energetic adventure is decidedly unique.

Veering from a socio-political commentary on the callousness of big-businesses, and the consumer culture that sustains them, via a moral message on animal welfare, all whilst continuing to pepper the film with poo jokes, Okja strikes that perfect balance of being a kids film, one that will educate the youngsters without bullying them with bias, and an intellectually stimulating watch for adults and big kids. Where else are you going to see a kinetic freeway chase ended with a fart? It’s tonally jarring, but you have to admire the ambition.

The whole endeavour is peppered with a playful light-heartedness that helps Okja rattle along. The animal rights group, led by Paul Dano’s wonderfully earnest activist, are a ramshackle team of Reservoir Dogs monikered eco-warriors, whose mid-film appearance injects the script with some much needed human momentum. Up until then we’ve had a roll-call of eccentric characters, from Tilda Swinton’s wonderfully insecure corporate woman, a further addition to her Snowpiercer/Trainwreck human chameleon roster, and Gyllenhaal’s OTT, slightly annoying animal specialist.

In fact, Okja’s biggest failing is in assuming that because the SuperPigs are cute lumbering giants, we don’t need anything approaching a personality from them. All of the bonding scenes between Marja and Okja are condensed into the opening fifteen minutes, at which point they’re separated before we’ve felt the weight of their relationship. A little more time with the two would have made the emotional turmoil of the journey much more satisfying.

What is undeniable is the power of the message, as much of an anti-establishment movie as it is a meat-is-murder diatribe, there is a final sequence that is both beautiful and brutal in its execution, and acts as unforgettable punctuation to the entire film.

Blockbusters rarely have this level of intelligent discourse attributed to the narrative, even if it’s nowhere near as subtly woven as Bong’s previous work, and whilst the cutesy Okja provides enough of a distraction for you to piggyback ride through this story, a bit more could have been done to stimulate the heart, as well as the conscience.