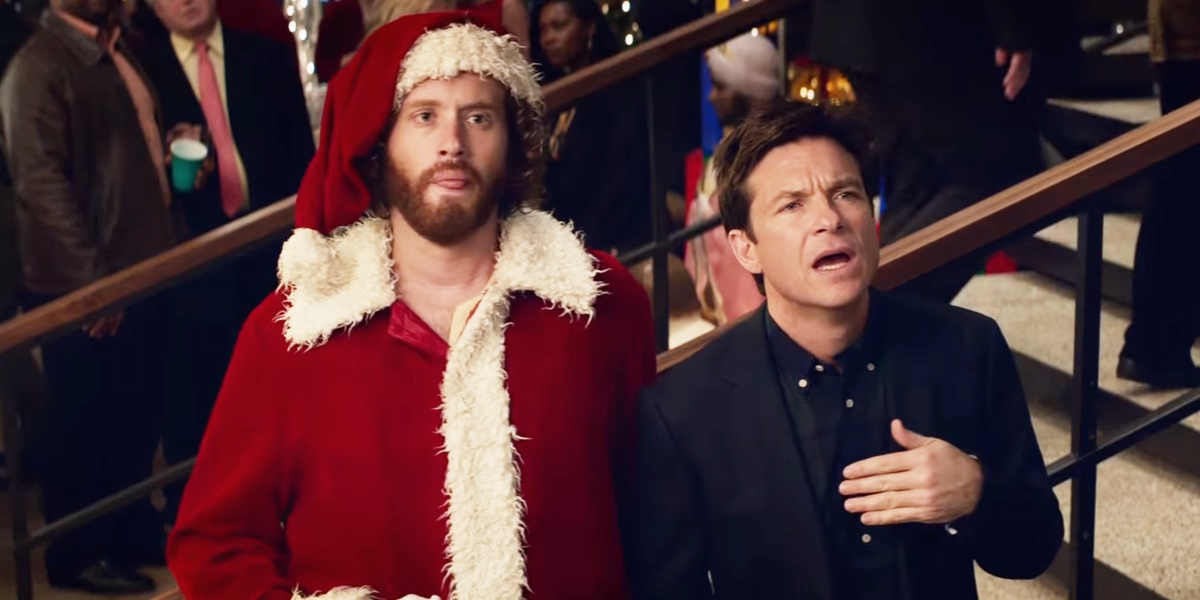 On the whole, party movies are sub-genre with a familiar outcome; more often than not you wish you hadn’t RSVP’d. Raucous gatherings are generally okay as a component of a comedy (see Bad Neighbours, Sisters) but when they’re the entire run-time you can either end up with National Lampoon’s Animal House, or the mouth-of-hell nadir that’s Project X.  At a time of year when you’ll be having your own work-place shenanigans, the pertinent question is, will you take more enjoyment from watching actors pretend to have more fun than you? With Office Christmas Party, the answer might just be ‘yes’.

The set-up is wonderfully simple — Carol Vanstone (Jennifer Aniston) is the interim CEO of a multi-branch company, one of which is run by her brother Clay (T.J. Miller), but that also happens to be an office she wants to shut down. In order to save two hundred employees and guarantee them their Christmas bonuses, Clay and his Chief Technical Officer, Josh (Jason Bateman), plan a party to end all parties, all in order to impress a client and keep the business afloat. Cue Jesus on a horse, NFL players you’ve never heard of, and a cocaine spewing snow machine.

Being a Christmas movie, it’s perhaps appropriate that this feels like a gathering of familiar characters getting together for a good time, which thankfully translates to the audience, and just about manages to avoid outstaying its welcome.

So we get Jason Bateman playing Michael Bluth from Arrested Development, Jennifer Aniston reprising Horrible Bosses shtick, Rob Corddry playing the foul-mouth degenerate he did in Hot Tub Time Machine, T.J. Miller as his Silicon Valley alter-ego writ-large, Jillian Bell straight talking and spit balling in the same way she did in 22 Jump Street, and Kate McKinnon being Holtzmann from Ghostbusters.

This is in no way a bad thing though, because they’re all great at it, especially in the case of McKinnon. Here cementing her breakout year with yet another film stealing performance as the rollneck wearing HR woman. Her dance routine to 90’s classic Let Me Clear My Throat will plant a muscle aching smile on your face.

Perhaps the biggest surprise is Olivia Munn, who was a victim of the X-Men: Apocalypse mess, lumbering around spouting lifeless dialogue. Here, she gets to flex her comedic chops to winning effect.

The script veers from pop-culture zingers – ‘I’ll go Gone Girl on you’ – to more puerile fart jokes, but it’s generally more hit than miss, in a throw everything and see what sticks kinda way.

The overriding lack of originality does stretch to the plot beats, so it’s a good thing the cast is so much fun to spend time with. Everything from Tina Fey’s Date Night, to the aforementioned Horrible Bosses, spring to mind as the story deviates to the criminal underground (Jamie Foxx’s Muthaf*cker Jones, anyone?), and ends in a frantic Fast and Furious quoting car chase finale. You really have seen it all before.

Office Christmas Party will sit nicely in a box-set alongside last year’s The Night Before and the Bad Neighbours films, and whilst there are few surprises to be had, there are some genuine belly laughs on offer from the likeable ensemble.