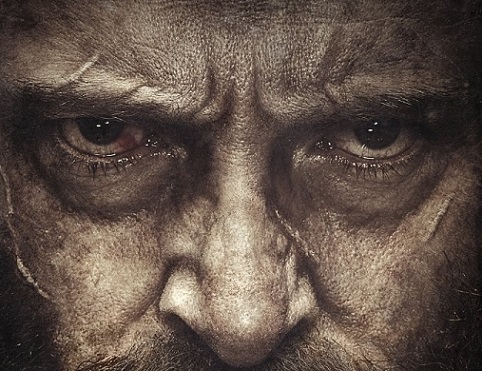 We’ve seen our superheroes downtrodden before, think Age of Ultron’s sulky Hulk, but they’re always a montage or Macguffin away from a heroic resurgence. We’ve never been presented them in the way James Mangold does with Logan. Desperados, beaten up by life, broken beyond repair, not by some supervillain, but because they’ve had enough of the struggle. Immortals ready to die.

In the past Hugh Jackman’s Snikt Snikt has been cartoonish (X-Men), broodingly dark (X-Men 2), and a punchline cameo (First Class), but he’s never been as real and empathically vulnerable as he is here.

Setting the tone in the opening credits, Logan, in what becomes a recurring motif, wakes up lying on his back, summoning the energy to muster a guttural f-word from within. It’s the pre-cursor to a piece of lung puncturing, skull piercing action. Straight away you know what kind of world Wolverine exists in, and for the rest of the movie it’s Mangold’s intention to show you the kind of man the former spandex wearing, quip happy X-Man has been become because of it, and it aint pretty.

Holed up in a desert locale comprised of abandoned buildings and rusted water tanks, Logan makes money as a chauffeur to the oblivious youths on the Mexican border. His only companions are an albino mutant tracker named Caliban (Stephen Merchant), and his old handler come mentor, Charles Xavier (Sir Patrick Stewart), who seems to be losing his faculties in a way that poses a threat to anyone in his immediate vicinity.

Their uneasy alliance is disrupted when a seemingly mute child called Laura (Dafne Keen) shows up, bringing with her a link to Logan’s past, and a heap of trouble in the form of Boyd Holbrook’s robotic armed hunter.

It’s probably for the best to keep any further plot details shrouded in a dust cloud kicked up by the numerous fight scenes, simply because one of the best things about Logan is how you never quite know which path this American road trip is taking you down.

Suffice to say, it’s one riddled with action sequences that hit as hard as an adamantium punch. As well as the brutally choreographed fisticuffs, there’s some great invention on show, with a brilliant flip-reverse of the playful Quicksilver sequences from the most recent X-Men outings. It represents what’s so unique about Logan, how it impresses like those films which share its DNA, but executes them in a manner that adds weight, and genuine armchair gripping tension, to separate it from all that has come before it.

Then there’s Hugh Jackman, who has never disappointed in the role, even when asked to prop up an ensemble with shtick rather than substance. If this is to be his last outing as Logan, then it is a peak performance, leaving absolutely nothing in the locker, and becoming the character fans have waited so long to see. With his ill-fitting clothes, tired eyes, and a desire for redemption or death, whichever comes first, he is unrelenting, sympathetic, and utterly transfixing.

He’s complimented by the wonderful Patrick Stewart, who relishes the chance to drop the stoicism normally associated with Xavier. He has moments of genuine humour, and some deep seated pathos of portraying a man slowly diminishing.

Dafne Keen is a wonderful find; asked to do most of her work through facial expressions and large sorrowful eyes, her chemistry with the main players is integral to why Logan’s emotional beats have so much impact. Plus, she’s just so damn kick-ass.

Mangold’s direction is also a significant factor in making the film feel so distinctive. He employs a dull, sand flecked palette, the exact opposite of the bright colours and huge spectacle we’d normally associate with both his previous Wolverine film, and the genre as a whole. It grounds the movie, accentuating the reality of it all. Making sure we care.

2017 might have begun with people clamouring to see Baby Groot, and this in no way diminishes the fun to be had with whichever your preferred cinematic universe is, but Logan is a different beast from them, one that kicks you hard in the senses and the tear ducts.