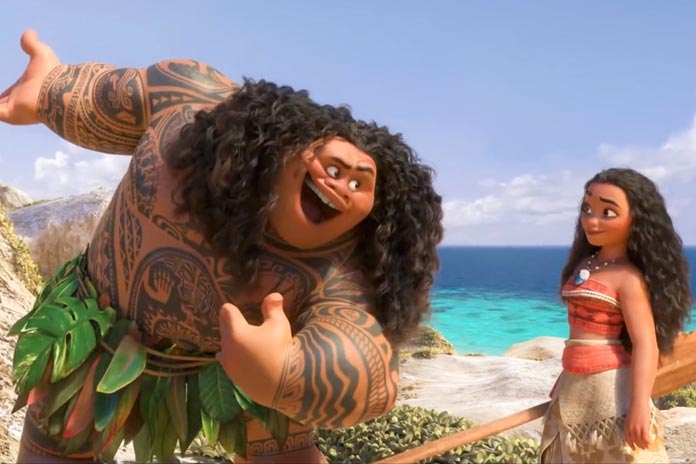 For their 56th animated feature film, Moana, Disney has done a meteorological 180 after the behemoth that was Frozen, shifting locales to the warmer climes of the Pacific, but keeping the formula pretty much the same.

Based on stories from Polynesian mythology, this tells the tale of Moana Waialiki (Auli’I Cravalho), daughter of a ‘wayfinder’ Chief and keen nautical enthusiast. When her island succumbs to failing crops and the fisherman’s catches begin to dwindle, it’s revealed that a curse has been placed upon it due to the actions of demigod Maui (Dwayne Johnson). The island Goddess Te Fiti, who created all life, before becoming the very land on which they live, has a medallion for a heart, and it is this that Maui has stolen. So together the two set out on an adventure to return the heart to Te Fiti, taking in aquatic beasties and angry coconut wearing tribes along the way.

The talent involved in Moana is like a convergence of people at the peak of their creativity. Directors John Musker and Ron Clements were not only behind some of The Magic Kingdom’s most lauded output (The Little Mermaid, Aladdin), they were arguably the reason for the revival and a return to traditional animation with The Princess and the Frog. In Moana they’ve created a film with a unique visual style; colour bursts compliment some truly inventive action sequences. It goes without saying that most modern animated fare is easy on the eye, but Moana is beautiful on a whole new level.

Filling their lungs, you also have songs written by Hamilton wunderkind, Lin-Manuel Miranda, and whilst none are as catchy as Frozen, which thankfully might save us from millions of YouTube videos featuring in-car sing-a-longs, they fit perfectly with the films themes and message.

Disney’s previous effort, Zootopia, succeeded in offering us the idealistic view that we can all get along, despite being different, something you’d hope would resonate with audiences. Moana continues this forward thinking trend of presenting us with a fully rounded female hero to stand alongside Furiosa and Rey. She is a fierce presence, striving to find identity within her own culture, which might not be new for Disney, but as a brown skinned female protagonist, without the goal of a Prince in sight, this is all welcome.

Instead of a knight in shining armour, Moana is saddled with Johnson’s Maui, a big-headed egomaniac with tattoos that act as his conscience, and the two of them squabble like brother and sister, which along with dim-witted chicken HeiHei, provides the film with its funniest moments. The Rock even gets to add another string to his bow by belting out the song ‘You’re Welcome’. A ditty about all of his heroic achievements.

Moana doesn’t really do anything new when it comes to the Disney template, but it fills the roles with wonderful characters, the sound with foot-tapping songs, and the screen with outstanding spectacle. Set sail.