I grew up with Winnie the Pooh so naturally when talk of a movie was underway I was hesitant especially with the premise being about Christopher Robin all grown up, would they go dark or light? Would it remain true to Pooh? The answer is evident in the first few moments when you see a young Christopher Robin saying goodbye to his friends in the 100 Acre Woods and thus we move through time and see Christopher Robin become a completely different adult than he was a child.

That difference is the one confusing part, is it possible someone could lose everything that they were as a child so much so that they’d put the same pressures on their own child? The story itself is a tale we’ve all heard before and a fantastic reminder of what should be important for adults, but that’s what made me wonder even more was this movie for adults or kids? Perhaps both?  Since it does touch on the importance of family is quite obvious that Disney wanted to make sure adults got a good lesson from the film about treating everyone with kindness and taking time out for family before it’s too late, but then you have the kid jokes thrown in the young adventurer off on their own journey away from the adults which should intrigue kids, after all that kid doesn’t dream of their own grand adventure? And that’s what Pooh was about when I was a kid reading those stories and dreaming that you could go off on these daring yet imaginative adventures with your favorite stuffed animals, but that’s the beautiful part about childhood you can imagine and you should and for that this could be a great movie for a kid with an active imagination and letting them see everything that’s possible even when you get older. 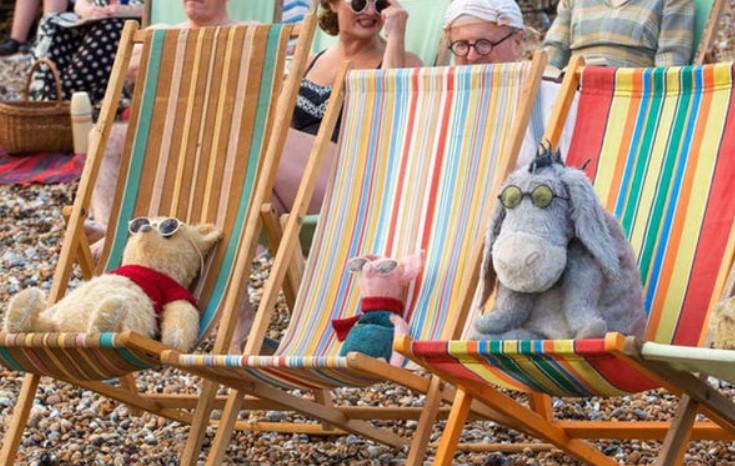 As for the movie itself, it is solemn and somewhat slow moving, but that’s Pooh they nail the Poohisms right down to his famous quotes “People say nothing is impossible, but I do nothing every day.” it’s there it’s all there, Pooh couldn’t be anymore Pooh and that’s what I loved, but as an adult seeing this I have to admit I got bored from time to time the conflict is very much set for a child to understand, I mean I’m not sure Disney could make the movie any more G. But thinking back on the old Pooh I have to wonder would I have liked this better as just a Winnie the Pooh Film? Would it have been more enjoyable taking us straight back to the 100 Acre Woods and taking us on a true Pooh adventure? I’d like to think so and that’s what makes this review so hard because the nostalgia is there, but it still felt like it could have been more.

To reiterate, Christopher Robin is an enjoyable film, maybe not the summer children’s blockbuster Disney is used too, but quite enjoyable and if you are a Pooh fan you’ll generally love seeing your favorite bear on the screen as everything about him is utterly perfect even with the storyline somewhat lacking.

So we have to ask did you see Christopher Robin? Did you agree with our take? Let us know in the comments below.