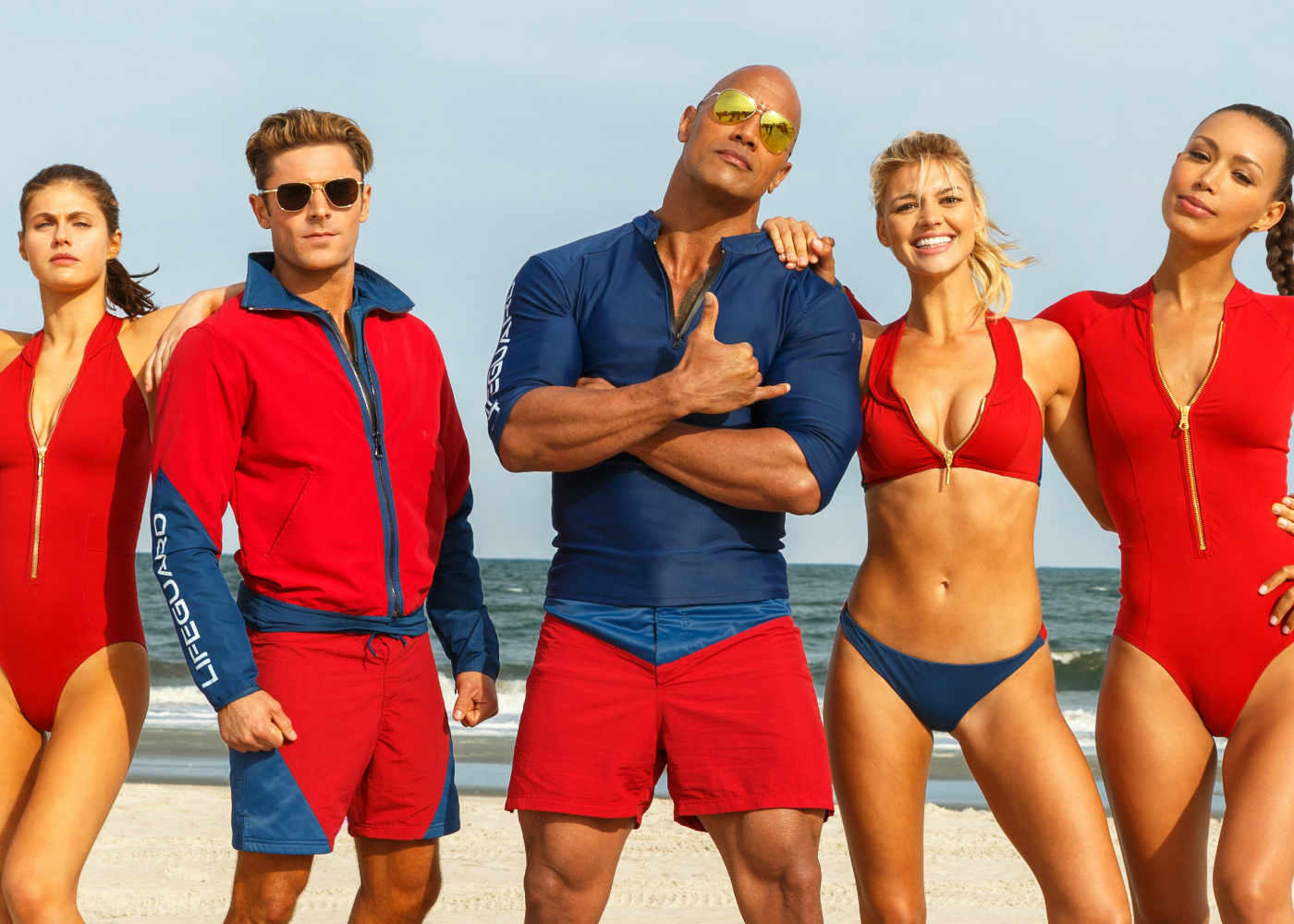 There was hope that the long gestating big-screen adaptation of 90’s TV slow-motion cult, Baywatch, would take the same approach as the Jump Street franchise. A knowing, subversive, genuinely hilarious and tenuously linked take on an old small screen classic. Well, that hope definitely doesn’t float; instead it drowns, with lead balloon weights around its ankles, suffocated in dick jokes and tedious male wish-fulfilment.

Taking on the role made famous by summer 2017’s go-to cameo, David Hasselhoff (who along with Pamela Anderson has a minuscule role), is Dwayne Johnson, as Mitch Buchanon. Introduced rescuing a distressed swimmer from the sea as the title card explodes behind him, Mitch is the head lifeguard of the elite Baywatch team. A kind of extreme sports, all action, beach detective agency who regularly get pulled up for treading on the toes of the local Police department.

It’s time for their annual recruitment drive, which brings disgraced Olympic swimmer, Matt Brody (Zac Efron) to town looking for a spot on the team. He’s arrogant, brash, and has no real team ethic, which leads him to clash heads with the formidable dome of Mitch, just at about the same time that a mysterious batch of drugs has begun washing up on the beaches. Cue squabbling, name calling, and iconic swimsuits galore.

Nobody was expecting Shakespeare here, but what we get instead is a boorish precedent set within the first minutes that never lets up. The schlubby guy who spends his days leering at Kelly Rohrbach’s CJ, who unfathomably finds this personality vacuum attractive, gets his penis stuck between the holes of a beach bather in a sequence of sub-par American Pie comedy. It goes on for quite a bit; you’re waiting for the laughs to kick in, and before you know it we’ve been edited to a similarly unfunny scene, accompanied by an unrelenting soundtrack that feels like one of those MTV pool party shows you used to channel hop to in the mid-2000’s.

The tidal wave of mediocrity does throw up a few bits of treasure floating within the surf; Dwayne Johnson’s performance, as is the way these days, is so enthusiastically infectious that you can’t help tittering at some of his put downs, even if most of them have been seen in the trailer. His ongoing name-calling with Efron, who has to stop doing these frat douche roles that he seems to have made his own niche, are a roll-call of boyband names, insults, and even a great High School Musical gag. They’re peppered throughout, and are really the only thing that keeps Baywatch afloat.

Most depressing of all is the treatment of Alexandra Daddario and company, who are reduced to less than the roles of the women they’re sending up. There are entire scenes during which Daddario seems to be open mouthed, on the verge of contributing something which isn’t attributed to the movements of her body, and she’s just left hanging there. It’s a movie that feels like it has been made by teenage boys for teenage boys, and that’s being harsh on teenage boys as a demographic.

There was a real opportunity with Baywatch 2017 to poke fun at itself, but it forgoes the opportunity to be subversive by opting to be stupid. Perhaps the most damning critique is that with comedies that struggle to generate laughs, you can always count on the end credit outtakes to send you home with a smile on your face, but here, even they are dead in the water.