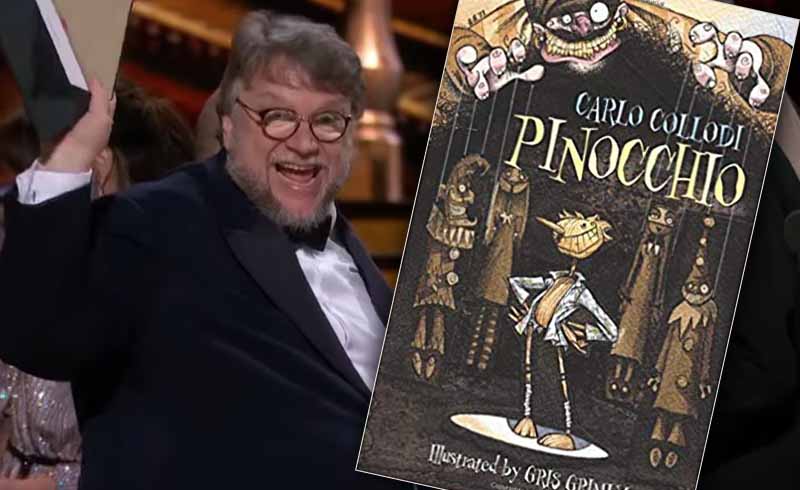 2017 was the year of Guillermo del Toro what with The Shape of Water winning him all the awards. Now del Toro is going to dip his toes working on his first animated movie. News has just come out that del Toro is teaming up with Netflix to bring to screen a stop-motion animated musical version of Pinocchio.

Talking to Collider, del Toro explains how much this film has become a passion project for him:

“No art form has influenced my life and my work more than animation and no single character in history has had as deep of a personal connection to me as Pinocchio. In our story, Pinocchio is an innocent soul with an uncaring father who gets lost in a world he cannot comprehend. He embarks on an extraordinary journey that leaves him with a deep understanding of his father and the real world.”

It’s worth noting that this Pinocchio will not be based on the more popular Disney version of the character, but on the book illustrated by Gris Grimly. Anyone who watches del Toro’s films knows that Grimly’s style absolutely fits his aesthetic, and I think stop-motion animation would be the perfect medium.

Joining del Toro for the movie is Mark Gustafson who will be co-director of the project which will be made under the Jim Henson Company banner. Mackinnon and Sanders (Corpse Bride) will also be providing the puppets for the movie.

What I’m excited about is Patrick McHale, who is attached as a co-writer of the film. McHale is a veteran of Adventure Time in Cartoon Network, but he’s also created the wonderful miniseries Over the Garden Wall. I can’t wait to see what kind of collaboration he’ll have with del Toro.

No release date has been announced for Netflix’s stop-motion musical Pinocchio.