Skip to content
Home » Hands-On: Our Time with the Nintendo Switch 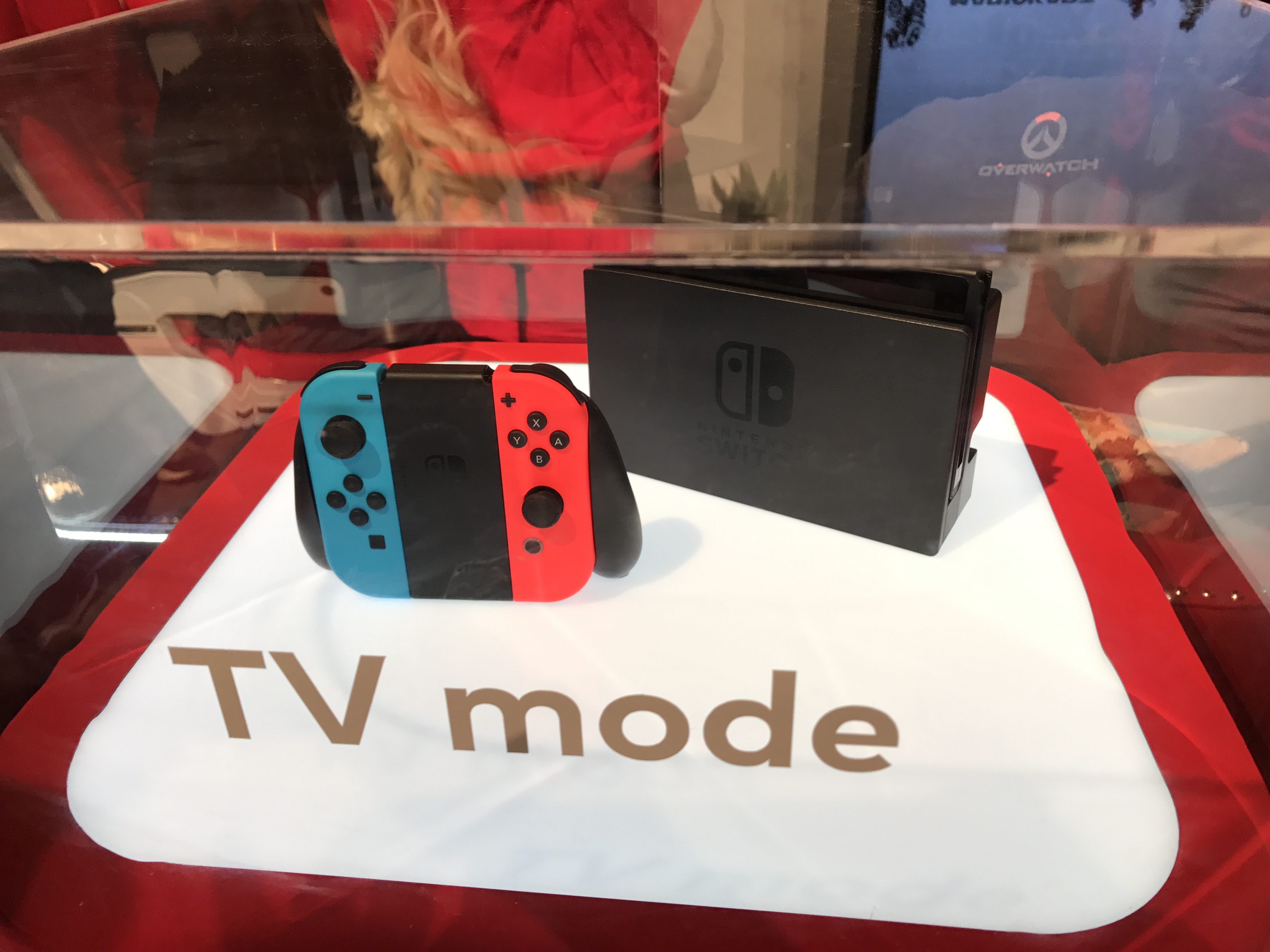 We recently had the chance to try out the Nintendo Switch at PAX South prior to its March launch. Of all the booths at the expo, Nintendo’s was certainly the most lively and expansive. Between the two-hour wait to demo The Legend of Zelda: Breath of the Wild (worth it), and the live Mario Kart 8 Deluxe and Arms competitions, it was hard not to be excited about the new console even if you weren’t particularly sold on the concept. I must admit that I was skeptical of the Switch going in even as a life-long Nintendo fan who was planning to buy the Switch anyway, both out of loyalty and love of staples such as Zelda and Mario. However, after spending time with the system, my opinion changed. The Switch may not be able to directly compete power-wise with the XBOX or PS4, but Nintendo did exactly what Nintendo does well: offer a unique experience targeting all ages and all levels of gamers. 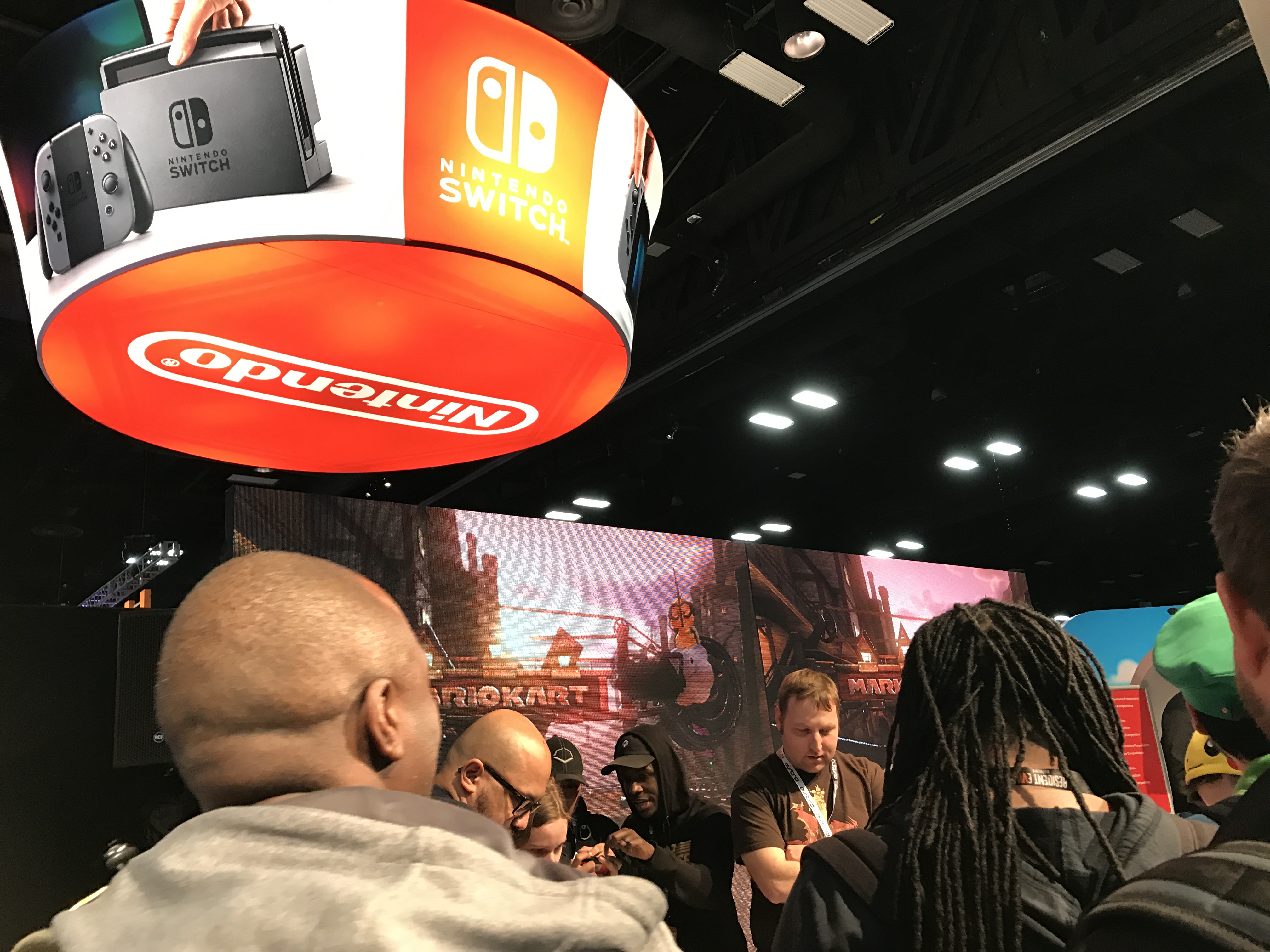 The second game I demoed was Breath of the Wild, which was easily the most popular game on display and one to which I was particularly looking forward. It was also my first chance to try out the system’s handheld mode and the Joy-Con Grip controller. I must say playing the game, even for a short amount of time, was beyond my expectations. The graphics were impressive, with vibrant colors highlighting the expansive landscape. Despite complaints about the game running on the Switch in merely 900p and 30 fps on a TV display, I didn’t find the graphics noticeably lacking. However, I can imagine the lower frame rate and below 1080p graphic quality might be noticeable to some players for whom it is a greater concern. I do not think it will detract overall from the gaming experience. 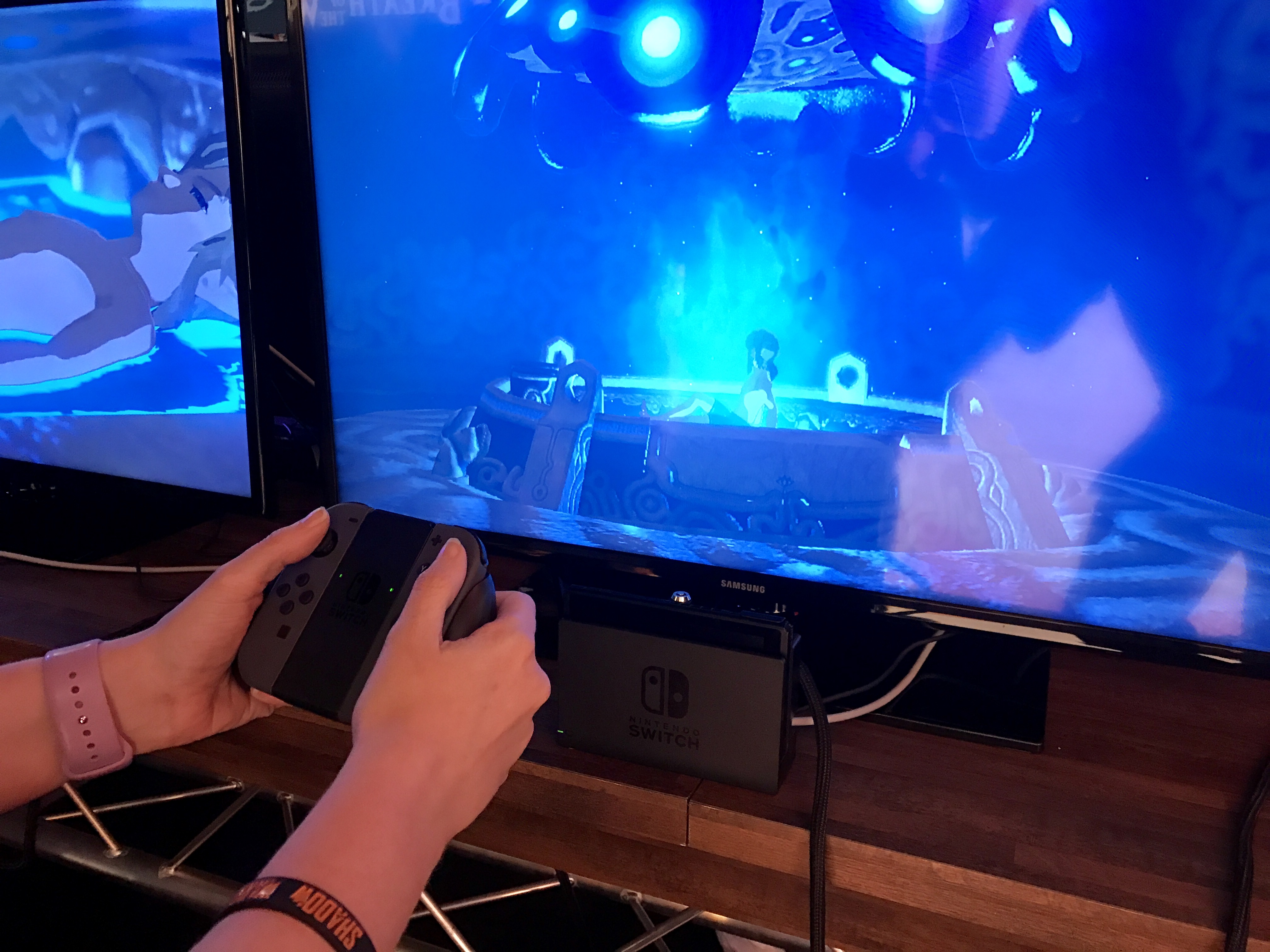 The controls were smooth and easy to pick up using the Joy-Con Grip controller. Within the Grip, the small controllers felt more robust and much more like a traditional controller. The diagonal position of the two analog sticks was incredibly easy to adjust to and in some ways seemed far more natural than having them side-by-side. I was happily wandering around Hyrule, finally thinking I’d been totally sold on the Switch, when I was advised to try the system in handheld mode.

On the positive side, switching between TV and handheld mode is simple and takes only as long as it takes you to remove the system from its station, remove the Joy-Con controllers from the Grip and slip them onto the sides of the system. From there, I simply pressed a button and the game immediately appeared on the little tablet. The Switch is a good size for a handheld and feels sturdy. The Joy-Cons, when placed on the sides of the Switch, are positioned the same way as they are within the Grip, thus requiring no control adjustment. Thier small size also seems like less of an issue when attached to the sides of the Switch. The only downside was an obvious drop in graphic quality.

When in handheld mode, the game appeared more pixelated or blurred, especially Link’s figure when he moved. I at first thought it was more noticeable because I had first experienced the game on a larger screen, but I noticed the same pixelation when playing Super Bomberman R, and it was only demoed in handheld mode. While this doesn’t really detract too much from the gaming experience, it was enough to cause me to quickly put the Switch back in TV mode so I could enjoy Zelda in higher quality.

I was finally able to try the Switch’s Pro controller when playing Splatoon 2, which was a blast even though my team lost both tries due, largely, to the fact none of us were experienced Splatoon players ( . . . that will likely change). The layout of the Switch’s Pro controller closely matches the Joy-Con Grip, making changing between controllers a smooth experience. Since I prefer to play games like Mario Kart using the Pro controller anyway, the issue with the small size of the Joy-Con controllers is largely mitigated, especially since the size seems less of a problem when you are using the system as a handheld.

What finally sold me on the Switch came in the unexpected form of a game titled Snipperclips, which I played with a friend in tabletop mode. You play as two adorably emotive pieces of paper. The game requires you and a partner to work together to clip sections of your characters off in order to create the proper shapes to solve various puzzles. This requires more teamwork than you’d imagine and ended up being one of the most hilarious cooperative gaming experiences I have had. The idea of being able to pull out the Switch and play with your friends using the same screen felt novel, even if, technically, cooperative play using multiple handhelds has been around for a long time. But, using the same portable screen lent to a feeling of camaraderie and intimacy that using multiple devices does not. The only downside was, again, the small size of the Joy-Con controllers that will likely be an issue for anyone with larger hands when being used separately.

Conclusion: Is the Switch worth it?

In the end, the Switch is really the best and worst of Nintendo. On the one hand, Nintendo once again chose not to go with a high-powered device that might compete graphically with the next generation of systems. This will limit their game library to some degree. The graphics on the handheld are also noticeably pixelated, especially on games with finer details. The Joy-Con controllers are simply almost too small to serve their purpose, but manageable. For gamers who are mostly console gamers and do not plan to use the switch as a portable handheld, the novelty of the Switch will largely be irrelevant. In some ways, I still think the Switch feels a bit behind the times, especially since I see mobile gaming going more and more toward phones and tablets rather than specialized handheld devices.

However, the Switch does offer a unique experience for gamers who want more out of their consoles than just home use. Any game you can play on your TV you can carry with you. Even with the downgrade in graphics, Breath of the Wild was still beautiful in handheld mode and being able to play it on the go is exciting. Finally, no waiting until you get home. You can play on your lunch break. The tabletop mode is enjoyable and offers a more sociable experience than using traditional handheld devices for co-op games. Even though I don’t usually carry a handheld anymore, I can see myself bringing this with me to a friend’s house from time to time, or on vacation.

The Switch is another example of Nintendo valuing uniqueness over raw power. The Switch will be a dream system for some, and for others it will be a lower-quality console (comparatively), but one on which they can play their favorite Nintendo staples. It all depends on how one uses it. For me, I get it now. After my time with the console, I now understand why developers like Ubisoft were impressed with the system. It gives developers something truly innovative to work with, at least as far as the system’s versatility goes. More than that, despite some of its shortcomings, it is a system that will continue Nintendo’s quest of bringing casual gamers into the fold, while giving long-time fans an exclusive and interesting experience.

What does the future hold for Nintendo? The Switch might not necessarily be an indication that Nintendo is headed in a better direction than the Wii or Wii U. Continuing to develop systems that do not compete power-wise with the next generation of consoles will continue to limit the Switch’s game offerings, possibly causing them to take a hit with certain groups of core gamers. However, as long as Nintendo develops distinctive titles that gamers love, and offers an experience like the Switch that makes the system so much more than just a console, we doubt Nintendo will stop entertaining and delighting us anytime soon.