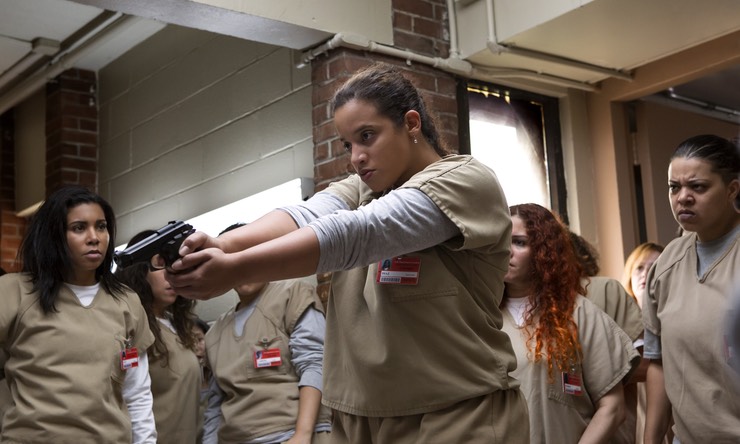 Spoilers for the fourth season of Orange is the New Black follows.

It’s that time of the year again — Netlflix has released a first look trailer for Orange is the New Black’s new season. And yes, shit is still very much real. Check it out below.

Season 4 concluded on an incredibly sad note, as Poussey Washington died at the hands of an incompetent guard who had no business working in the penal system. At the time of her passing, tension between the correctional officers and the inmates were at an all time high for Netflix’s hit series. Her death marked a tipping point. The scales were further knocked off center when the body of the “guard” that Alex and Lolly killed was discovered in the garden. With Red a prime suspect and everyone on edge, a riot was bound to happen. And it did.

It seems Season 5 will open with no ground having been lost. The trailer shows Daya holding two correctional officers at gunpoint, with dozens of inmates egging her on to fire. This scene was one of the last depicted in Season 4. The minute long look also offers a glance at Piper and Alex’s perspective, which wasn’t on display in the finale. Needless to say, Betty Page of Litchfield is looking to get far from trouble. Meanwhile, Chapman seems to be considering possibly getting involved. After all, how often do the inmates see a prison riot?

Along with the trailer, Netflix also released several images.

Again, a lot seems to be going on. Does Daya take a shot, or was that shot from another guard ambushing the inmates in the trailer? We’ll find out soon enough. The fifth season of Orange is the New Black will begin streaming on Netflix this coming June 9.